The South Central Ambulance Service NHS Foundation Trust (SCAS) has taken delivery of 40 Dacia Dusters for use by its Community First Responders. 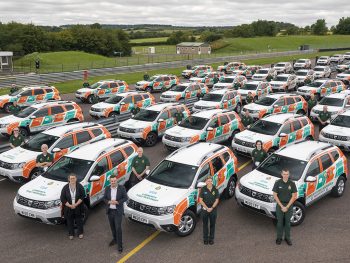 The new Dusters have been funded by South Central Ambulance Charity (SCAC), rather than Government NHS funding as there is none available for the Community First Responders (CFR) porgramme. The Dusters will be operated by specially-trained volunteers who provide a rapid response to many 999 calls where an ambulance is requested, but where the volunteer can often arrive quicker to administer potentially life-saving pre-hospital treatment.

The order follows a successful partnership between the Trust and Dacia, where a 4×4 version of the Duster was supplied in 2016 for use by Windsor Community First Responders. Although scheduled for a one-year period, the Dusters remained on fleet as Dynamic Response Vehicles (DRV) until 2019.

The new Dusters replace several ageing vehicles, which are now requiring significant attention to deliver a level of reliability that the role of a DRV demands.

Value for money, versatility and reliability were key influences in SCAC’s decision to invest in a new Dacia fleet.

The order consisted of 27 4×2 Comfort versions and 13 4×4 Prestige variants with all powered by a turbocharged 1.5-litre TCe petrol engine and a six-speed gearbox. The fully-liveried Dusters have been kitted out to the Trust’s specifications. The bespoke conversion includes additional lighting and storage solutions for medical equipment and supplies.

Vanessa Casey, chief executive of the South Central Ambulance Charity, said: “It was fast becoming apparent that a number of the vehicles used by our volunteers were no longer reliable or cost effective to run and there was no replacement scheme in place, so the ideal solution was for us to invest in a brand new fleet.

“With the added support given to us by Dacia UK we were able to secure a fleet that was both affordable and reliable.”

Previous: Venson survey shows motorists perceived to be more distracted by in-car tech
Next: A single date for the net-zero transition is a mistake, says BVRLA