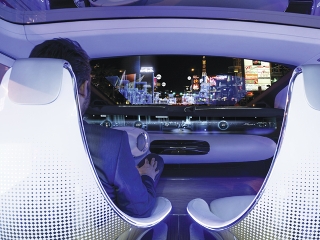 On-road trials might be underway, but driverless cars won't become a day-to-day concern for fleets by 2020. Instead, while legislation readies itself for full autonomy, it’s driver assistance systems – the foundation for driverless cars – which will become a big consideration for fleets.

The market is growing exponentially. Bosch, one of the biggest manufacturers of the sensors which underpin driver assistance systems, exceeded 50 million units last year, and it says sales of its radar and video sensors will double during 2015, for the second consecutive year. To put that into perspective, Bosch built two million radar sensors between 2010 and 2014, and expects to build its ten millionth next year.

Achieving a five‐star Euro NCAP rating already requires at least one driver assistance function and, as of next year, pedestrian safety systems will be part of that. Working with its Australian equivalent, ANCAP, a recent study by Euro NCAP showed autonomous emergency braking reduces low‐speed rearend crashes by 38%. As this is recognised by insurance ratings, it’s likely to push uptake further.

But ACFO chairman, John Pryor, says legislation is needed to remove the cost barrier: “If the technology genuinely reduces accidents ACFO would like to see it mandated in legislation in the same way as seat belts and ABS brakes and therefore not treated as an 'extra for Benefit‐in‐Kind tax purposes. Thus fleets would become early adopters.

“However, unless there are proven cost savings the majority of car fleets will not commit additional expenditure on such technologies.”

The challenge of lighter cars

Meanwhile, ongoing pressure on fuel economy will evolve the way cars are built. Thatcham Research is predicting that as many as 40 different materials – including different grades of steel, aluminium, plastics and carbon fibre – could be included in a mass‐market car by 2020 as manufacturers seek to shed weight.

Given that this means multiple joining methods and varying advice on whether panels can be repaired or replaced, the most fuel‐efficient cars also have the potential to be challenging to repair. Thatcham is already working to ensure that easy repairs are considered at the design stage, as this has a direct effect on insurance groupings.

Andrew Hooker, advanced repair studies manager at Thatcham Research says this shouldn’t stop vehicles being economical to repair, provided the information is readily accessible: “The risk is not from the materials, but from how these are integrated into the car with insufficient consideration of the repair process with more intrusive replacement procedures than are necessary. If fleet managers are

seeing more cars that are uneconomical to repair then they are welcome to engage with us here at Thatcham so we can include this in our repairability discussions with the vehicle manufacturers.”

Data as an asset

All new cars sold in Europe will have to feature eCall from 2018. The system enables data about the accident location, severity and number of occupants to be sent to the emergency services, improving response times. Widespread fitment will bring unit costs down to £104 on a new car, according to Department for Transport projections, and the data connection also creates a platform for other information to be exchanged.

For example, Vauxhall’s OnStar system can send monthly vehicle reports to a fleet operator and submit data about driving styles and maintenance to a telematics system. Connected cars could monitor driver behaviour to help prevent collisions, with the ability to shorten response times, improve occupant safety and potentially cut claim costs if the worst happens.

The evolution of the telematics industry into passenger cars is a promising sign for dashboard cameras too. SmartWitness estimates that around 20% of company cars already have them, and the drop in third‐party contests from the 40% industry norm to 2% with a dashcam means claims can be handled faster, minimising costs.

By the end of the decade, Craig Lamont, managing director of SmartWitness says dashcams could offer additional driver monitoring technology, such as the ability to detect when tablets or smartphones are in use – currently a difficult thing to track.

“Our insurance broker clients are telling us that there are more incidents caused by mobile phone distraction now than by any other means,” he says.

“Recent research has shown that response times for distracted drivers are worse than drink drivers and that was for hands free use of phone, so not even for having a phone to your ear whilst driving. Something needs to be done to combat this otherwise fleet managers leave themselves open to some potentially expensive insurance claims.”

John Pryor believes it’s a technology which must be supported by reduced insurance premiums, but added that fleets have their reservations about it: “Member comments would indicate a possible reduction in enthusiasm for the technology as evidence could be used to mitigate a claim against the claimant. Additionally, in the event of a serious accident, the police will confiscate the on board camera memory card, and it could be used to prosecute the driver.”

Pursuing the 78g/km average CO2 emissions indicated by the European Commission by 2025 will have a couple of knock‐on effects for vehicle repairs.

Compared to 2005, when high‐strength steels were rare in mass‐market cars, most fleet cars will include an unprecedented mix of materials and joining techniques, with some parts only suitable for replacement after a collision.

BMW, for example, recently introduced carbon fibre parts in the platform of the new 7 Series – technology which will cascade into smaller models.

Drivetrains will also become more varied. Ricardo expects most vehicles to feature a petrol or diesel engine in ten years, but with increased electrification. This will include plug‐in hybrids and a small number of hybrid and fully electric vehicles, but energy recuperation is the massmarket option. The growth of ‘mild hybrids’ – capable of harvesting energy and using a small electric motor to assist the petrol engine – will mean damage which bridges any electrical parts could result in expensive repairs.

It’s also becoming more common for vehicles to need software resets after they’ve been damaged, which can cost hundreds of pounds depending on if the bodyshop has the right equipment on site.

David Cresswell, director at Auto Body Professionals Club, expects technological advances will also lead to the repair industry becoming more specialised: “I think we will see, due to the levels of technology, more and more vehicles will need to be repaired at a manufacturer‐approved shop.

“For example some cars need headlight alignment reset after tracking, some require a full system sweep after an accident. Bodyshops will have to have the right equipment ‐they’ll still be independent, but with manufacturer approval.”

Smarter Travel By 2025, most vehicles will be new enough to have eCall and thus the ability to share data. Mapping company HERE is developing a communications standard to enable data from on‐board sensors – such as weather conditions, grip and mass braking incidents – to be gathered and relayed to following traffic. Advanced navigation systems could forewarn about problems ahead, further reducing accidents and avoiding delays, making them a real asset for fleets.

But the ongoing growth of handheld devices is a challenge. Last year, Apple patented a system which could lock functions on a smartphone if it’s being used by a driver, aiming to target the 80% of accidents it said were caused by distraction. There’s no release date suggested yet, but the patents include software built into the phone, such as analysing its travelling speed or using the camera to show they’re not at the wheel, and systems which block mobile phone signal in the driver’s seat, or to lock functions if it’s connected via USB with the ignition switched on.

The first driverless cars are expected in 2025, but it’s partial autonomy which will be helping fleets to reduce the risk of tired or distracted drivers. Bosch is aiming to have its first motorway‐ready autopilot technology market‐ready by 2020, and by 2025 it will have trickled down from luxury vehicles into the mass market. The company says this could significantly reduce accident rates – it’s claiming by up to a third in Germany.

Figures from Thatcham Research show a 45% reduction in the size of third party injury claims for the new Volkswagen Golf, based on 7,000 insured vehicles and attributed to autonomous emergency braking. This could help offset some of the additional costs of repairing complicated new vehicles, says David Cresswell. “No vehicle can overcome the law of physics, but the technology we’re seeing coming in is likely to avoid some crashes and to reduce the severity of the impact in others.

“I see more cars being repairable because of the avoidance technology, as it reduces the speed of the impact.

So rather than a total loss, it will be repairable. So we will lose some low‐speed impact cars, but save more at higher speeds because the lower impact speed as a result of the technology.”

Ricardo’s market predictions suggest most cars will have a high level of autonomy by 2035, such as the ability to park themselves and undertake large parts of the journey with no driver input. Driverless cars, which can travel door to door and essentially make all occupants a passenger, potentially with no need for a licence, will be an established technology too.

Given that almost all accidents today involve some sort of driver error, this is technology which could transform the way accidents are handled. Removing this factor could eradicate low‐speed impacts and parking damage completely, but it introduces questions about liability which cover a far greater number of parties.

Beyond vehicle manufacturers, that could include OEMs, local authorities or even potentially the fleet operator, all of whom are likely to get involved with the accident management process.

“There are some practical and legal issues that need to be addressed, particularly about where ultimate responsibility for an autonomous vehicle will rest,” explains Ben Howarth, policy adviser for motor and liability at the Association of British Insurers.

“If car drivers are replaced entirely by passengers who have no way of overriding or controlling the systems in the vehicle, it’s possible manufacturers would become liable in the case of accidents. The insurance industry’s focus will remain on ensuring claims are dealt with appropriately as technology develops.”

It’s clear that logging data will be important, too. Craig Lamont sees video as a potential way around the complications of dealing with a claim involving a driverless car: “There are clearly big problems about who is at fault in the case of collisions with driverless vehicles. It’s likely that all driverless vehicles should be installed with an in‐car CCTV camera to provide protection in the case of incidents.”

20 years of change for fleet operators

Summer 2017 – Reviews of the licensing, driving standards and liability for autonomous cars will be completed. Fully driverless trials will begin shortly afterwards.

End of 2017 – Type approval and ISO standards to be amended to include driverless cars.

January 2018 – Autonomous braking for cyclists to be included in Euro NCAP five‐star ratings.

2025 – First driverless vehicles to come to market, according to Thatcham.

2035 – Worldwide sales of vehicles with autonomous capability to reach 94.7 million, from zero in 2014, according to Navigant Research.