The Department for Transport has given the go-ahead for nationwide rollout of roadworks charging in a move to cut congestion. 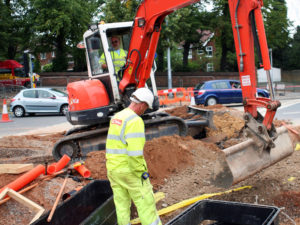 Last month saw the DfT announce it was continuing two inaugural lane rental schemes in Kent and London, where utility companies are charged up to £2,500 a day for digging up the busiest roads at peak times, and considering extending them across England.

Now, the DfT has confirmed the move and said it will produce guidance in the autumn to help councils with developing lane rental schemes for approval. The first schemes could start by the end of 2019.

The move follows a consultation last year, which saw the majority of respondents support the scheme’s rollout nationwide, with many saying they wanted to take advantage of the ‘clear benefits’ of lane rental schemes.

The London and Kent schemes, introduced in 2012 and 2013 respectively, have seen congestion on the busiest roads drop by incentivising utilities to switch to quieter roads to avoid peak times. The trials in London showed that some of the worst congestion caused by planned utility works was halved. The schemes also incentivise utility firms to collaborate on works. In London utility companies have worked together more than 600 times since the scheme began in 2015, up from just 100 beforehand.

RAC head of roads policy Nicholas Lyes greeted the news, commenting: “While motorists accept that some roadworks and congestion are unavoidable, lengthy and unnecessary queues are incredibly frustrating. RAC research suggests congestion on our roads and journey time reliability are growing concerns for motorists so introducing lane rental should encourage better planning and coordination of roadworks, and mean utility works are completed in a swifter, more efficient manner.”