Cornish taxi firm claims fuel and maintenance savings of £8,500 a year with LEAF 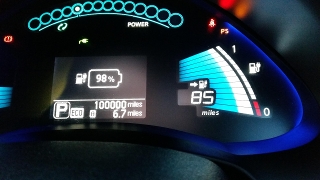 ‘Wizzy’, as the LEAF has been named by operators at St Austell-based C&C Taxis, hit the milestone in the course of more than 25,000 pure electric paying fares and having been rapid charged over 1,700 times.

The distance it’s covered since entering service is equivalent to 100 round trips from the company’s base in Cornwall to Glasgow, more than four times around the world or almost half the distance to the moon. But, despite living the same punishing life as any modern day taxi, C&C Taxis reports that Wizzy retains near full battery health and is still on its first set of brake pads.

"When we speak to other taxi operators they often tell us range and battery life are the biggest factors preventing them from considering an electric taxi," he said. "Then, when we tell them Wizzy’s done 100,000 miles and still has full battery health, they’re left speechless.”

“It’s no exaggeration to say Wizzy has transformed our business. We took a gamble when we bought her but she’ll have paid for herself in just 24 months and the savings we’re now making across the fleet are phenomenal,” he added.

Built in Britain and priced from £21,490 RRP (including Government Plug-In Car Grant), the Nissan LEAF is the world’s bestselling pure electric car and costs from just two pence per mile to run. It can travel up to 124 miles on a single charge and can be recharged using a domestic plug socket or from zero to 80% in  30 minutes at a rapid charging station.

Previous: Fleet Alliance voted one of UK’s best places to work for third year running
Next: ICFM says 2015 Silverstone Fleet Show is “the best show we have ever done”