Jaguar Land Rover has confirmed that it’s switching to a three-day week at its Castle Bromwich plant until Christmas as a result of “the continuing headwinds impacting the car industry”. 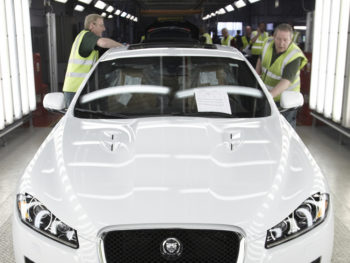 The announcement comes days after the carmaker warned that a no-deal Brexit could impact tens of thousands of jobs and according to Jack Dromey, MP for Erdington, is the result of “a combination of Brexit chaos and the mishandling by Ministers of the transition from diesel models”.

The revision to the production schedules for the plant, which produces the Jaguar XE, XF, XJ and F-Type models, follows previous production cuts announced earlier in the year, as the industry struggles with the switch to WLTP as well as declining diesel sales.

Managing director Jeremy Hicks told Fleet World that the company was facing unprecedented change in the fleet sector, including the “arbitrary” rise in benefit-in-kind for diesel vehicles. Most of its sales in the UK (80%) are diesel-powered, though new plug-in hybrids and the electric I-Pace are starting to shift demand.

In a statement, the carmaker said: “As is standard business practice, Jaguar Land Rover regularly reviews its production schedules to ensure market demand is balanced globally.

“In light of the continuing headwinds impacting the car industry, we are making some temporary adjustments to our production schedules at Castle Bromwich.

“We are however continuing to over-proportionally invest in new products and technologies, and are committed to our UK plants in which we have invested more than £4bn since 2010 to future proof manufacturing technologies to deliver new models.”

Commenting on the news, Fiona Cincotta, a senior market analyst at www.cityindex.co.uk said the carmakers’ plans for the mid and longer-term hinge firmly on the outcome of Brexit.

“Britain’s biggest vehicle manufacturer has made no secret of its fears of a hard or no deal Brexit. Only a few months ago JLR gave a stark warning that it may have to rethink billions of pounds of investment in the UK and its employees could face uncertainty if the UK leaves the single market,” she added.

“After heavy investment in the UK over the past 5 years and plans for a further £80 billion over the next 5 years, a hard or no deal Brexit could see JLR drastically change its spending plans. The manner which the UK leaves the EU will impact greatly on JLR’s future plans and whether they keep investing in the UK over the mid to long term or whether they look for an alternative to the supply chain uncertainty which a disorderly Brexit will bring.”

Previous: Today in Fleet – Monday 17 September
Next: Go with the Grain: How to deal with today’s fleet challenges