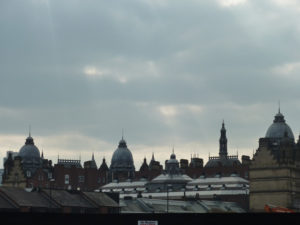 Announced at the end of last year, the ‘Class B’ zone would target HGVs, buses, coaches, taxis and private hire – but not cars or vans. Following a first phase of consultation around draft plans, the council has now taken on board feedback from local businesses and the public, and reduced the size of the boundary area to lessen the economic impact on businesses.

It’s also reduced the proposed tariff for non-compliant buses from £100 to £50 and is also proposing a charge for buses, coaches and HGVS of £50 a day and a charge of £12.50 a day for taxi and private hire vehicles – with a ‘sunset’ period now proposed for the latter and finance packages available to help assist the trade in the move to petrol hybrid and electric vehicles.

The consultation will also look at the ambitions for the city after 2020, calling on the public and businesses to outline what they believe the council should be doing post-2020 to address air pollution in the city, including the possibility of car-free days in the city and a low emission zone in the city centre.

And the council said it was pushing for a nationwide policy on intercity charging that would see vehicles only charged once per day regardless of the number of clean air zones that were entered.

The changes follow work by The British Vehicle Rental and Leasing Association (BVRLA) and ACFO to outline the fleet case, and the need to not unfairly punish drivers or damage small businesses and the local economy, at a roundtable event.

Councillor James Lewis, Leeds City Council executive board member for resources and sustainability, said: “Ensuring we reduce pollution levels across the whole city is a real priority for the council and something we are working hard to achieve. As much as the clean air charging zone forms a key part of our preferred scheme – ensuring all our communities are able to breath clean air is the end goal.”

Eco law group ClientEarth said it would be going over the plans. The firm scored a third legal win against the Government earlier this year over air quality plans after it said the Government had backtracked on plans for clean air zones in Birmingham, Derby, Leeds, Nottingham and Southampton, which it believes should be mandatory.

Commenting on the latest Leeds proposals, senior campaigner Andrea Lee said that clean air zones are the quickest way to bring down illegal and harmful levels of air pollution as soon as possible and added that the UK government is responsible for making sure that Leeds meets legal limits of air pollution in the shortest time possible, continuing: “It not only needs to ensure that local plans are up to scratch but also needs to take action at a national level to help people move to cleaner forms of transport. This includes greater investment in public transport and targeted scrappage schemes with contributions from car manufacturers, which helped create the problem of illegal air pollution in the first place.”

The revised proposals and consultation questionnaire will be available to view at www.leeds.gov.uk/airqualityconsultation from 28 June 2018. The consultation will close on 12 August 2018.

Previous: Hyundai and Audi tie-up on fuel cell tech development
Next: Volkswagen and Ford talks could lead to joint vans