Condition of local roads is number one gripe for drivers, finds RAC Report on Motoring 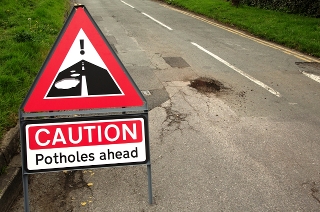 The RAC’s survey of 1,555 drivers found that one in 10 (10%) said the condition of local roads was their top concern, while a further 20% listed the issue as one of their top four concerns.

And half (50%) of drivers believe the condition of roads in their area has deteriorated in the past 12 months with just 10% claiming it has improved; the remainder reporting no change.

This year’s report – now in its 27th year – also asked drivers about priorities for transport spending and found maintenance of local roads to be the number one priority for three in every 10 motorists (30%) while a further 48% cite this as a top five priority. Targeted improvements to local roads, such as those designed to improve safety or reduce bottlenecks, are the number two spending priority (12% of drivers) with a further 54% saying this is one of their top five priorities.

The RAC added that although fixing local roads is the top spending priority for motorists, the scale of the problem outweighs the government funding available. The Government has itself estimated the cost of bringing local roads in England alone back to a state that is fit for purpose to be up to £8.6bn despite only allocating £6bn purely to maintain and improve local roads up until 2021. However, other estimates from the Asphalt Industry Alliance (AIA), put the cost of returning English and Welsh local roads to a ‘reasonable condition’ to be far greater at £12.16bn (England £11.5bn).

RAC chief engineer RAC David Bizley said: “The Government has taken bold steps to ensure that the strategic road network in England is fit for purpose and is capable of supporting economic growth by the implementing a Roads Investment Strategy and ring-fencing vehicle excise duty to fund the maintenance and development of the network from 2020. Equally, bold and imaginative action is now required to address the deficiencies in local roads as funding from central government is insufficient even to address the current backlog of repairs and local authorities are currently unable to fill the gap from council tax revenues.”

The RAC added that the state of our local roads is very likely to worsen, creating an ever-increasing negative effect on economic growth.

David Bizley added: “It is a measure of the problem that we still talk about success in terms of the number of potholes we can fill. However, most potholes develop because of a lack of preventive maintenance. We urge the Government to follow the recommendations of the Coalition Government’s Pothole Review to ensure that the funds allocated to local roads maintenance are used for preventative maintenance of roads rather than just on short-term remedial repairs.”