Reducing environmental impact is as persuasive as saving money when buying an electric car, finds new research by Geotab. 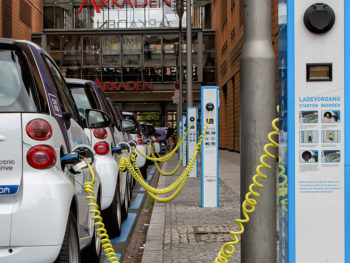 Identifying electric vehicles’ appealing factors, 41% cited reducing their impact on the climate as a key motivator, compared to 45% for lowering running costs and 37% for lowering tax costs.

The survey also revealed that despite best efforts by industry to improve electric vehicles’ range and supporting infrastructure, these two issues remain the top concerns for consumers, with 42% of respondents worried about range and 32% worried about where to charge – and 66% believed that the UK needs to do more to increase adoption. Despite range anxiety, 97% of the 3,001 respondents have daily round-trip commutes of fewer than 100 miles, which is well below the average 224-mile range of the UK’s current top five best-selling EVs.

Despite awareness of electric vehicles, only 13% of respondents said their next car will be fully electric, although that figure rises to 23% in Greater London.

“This data shows not only that improvements to infrastructure are vital to encourage EV adoption and that the industry needs to do more to educate consumers about how far the technology has come, but that the British public are primed to buy into electrification. With climate change such a significant part of the national conversation, reducing vehicle emissions has never been more important. It’s encouraging to see so many people backing further action in support of EVs.”, said Edward Kulperger, VP Europe at Geotab.

“The difference in consumer attitudes between different regions of the UK shows the impact that EV policy can have”, suggested Kulperger, “London has both the most mature legislation to encourage adoption of electric vehicles, including the ultra-low emissions zone introduced this April, and densest network of charge points in the country. The fact that London is also where consumers are most focused on cost opens up the question of carrot and stick in encouraging EV adoption”.

The high number of charge points in London – 0.74 for every 1,000 people, according to recent publicly-available data – resulted in the highest satisfaction with EV infrastructure in the country, with 38% of Londoners agreeing that their local area has good public EV charging infrastructure. However, the survey also showed that Scotland has just 17% satisfaction, despite having the second-highest number of charging points at 0.61 per 1,000 people as well as government grants and incentives including free charging on many major networks, unlike that available in the rest of the UK.