Citroën has revealed the European version of its flagship C5 Aircross five-seat SUV, which will bring the fight to models such as the Nissan Qashqai and Seat Ateca. 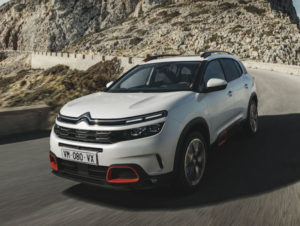 Previewed last year as a Chinese-only model – which has already sold more than 40,000 units – the European version introduces a number of European-specific features.

Based on PSA’s EMP2 platform used across group SUV models from the Vauxhall Grandland X to the Peugeot 3008/5008, the new C5 Aircross will launch in Europe at the end of 2018 and will be the first Citroën with a plug-in hybrid powertrain at the end of 2019.

Comfort has been a key factor in its development with Citroën billing it as the most comfortable model in the sector due to its Advanced Comfort programme, Progressive Hydraulic Cushions suspension – which works in two stages to match the surface of the road and is said to deliver a ‘magic carpet ride’ effect – and Advanced Comfort seats, which are unique to Europe.

It also brings practicality in the form of three individual sliding, folding and reclining rear seats – bespoke to the European version – and claimed best-in-class boot space of 580 litres to 720 litres.

Design features include a floating roof, Airbump panels made famous by the C4 Cactus and a broad range of personalisation features, including a possible 30 different exterior colour combinations, seven body colours, a black two-tone roof option and three Colour Packs.

Engines will cover petrol and diesel units ranging from 130hp to 180hp and the Citroën brand’s new EAT8 automatic gearbox. Petrol versions will comprise the PureTech 130 S&S 6-speed manual and PureTech 180 S&S EAT8, while three diesels will range from the BlueHDi S&S 130 6-speed manual to the BlueHDi 130 S&S EAT8 and BlueHDi 180 S&S EAT8. It will also be the first Citroën available with plug-in hybrid (PHEV) technology at the end of 2019, with a range of 37 miles (60km) in zero-emission mode.