By Craig Thomas / 1 month ago / Latest News / No Comments

French carmaker Citroën is looking beyond its traditional customer base and distribution channels with its Ami urban mobility vehicle, unveiled last week. 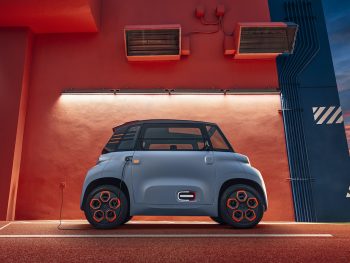 The two-seat Ami will not only be offered as an alternative to city cars but also bicycles, electric scooters and electric mopeds

Arnaud Belloni, the brand’s marketing and communications director told Fleet World: “It’s not a car. It’s a mobility object. Ami will be competing with bicycles, electric scooters and electric mopeds, with that kind of scene. We are creating a new segment.”

Citroën’s CEO, Vincent Cobée added that when developing Ami, the company’s executives approached the vehicle from a completely different angle.

He told us: “We talked about innovation. We talked about financing schemes, about distribution schemes and we talked about things that we believe are deeply rooted in everybody’s needs – which is individual, clean, urban mobility. So we bring to bear all the capabilities of an industry or group to answer that particular societal need.”

Distribution channels will also change, in line with the range of different vehicles that are available to users, from vans, to car, to quadricycle “mobility objects”, as Ami is available to share, rather than own, through Free2Move; a service owned by Citroën’s PSA parent company. As Cobée said: “Sharing is an additional service. It’s not a replacement for the car.”

Ami will initially be available in six European territories – France, Spain, Italy, Belgium, Portugal and then Germany – with a rollout to further markets, including the UK, at a later date.