Fleets and drivers changing tyres earlier than the legal tread limit are wasting money, harming the environment and potentially impacting on the tyre’s safety performance. 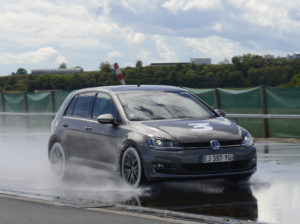 Michelin tests at its Ladoux proving ground have shown that on wet roads, some worn tyres can perform as well as some new tyres.

That’s the view of Michelin as it rejects calls from parts of the tyre industry to increase the minimum legal tread depth from 1.6mm to 3mm.

Kwik Fit recently highlighted how almost three-quarters (73%) of the UK’s police, fire and ambulance services change their vehicles tyres at a tread depth of 2.6mm to 3mm, and urged drivers to follow suit.

Yet Michelin says there is no link between tread depths at 1.6mm and increasing accident rates, and adds that driver safety on dry roads can actually improve as their tyres get worn.

In addition, changing tyres at 3mm would cost the motorist money and increase carbon emissions – especially as a tyre becomes more fuel-efficient as it wears. An Ernst & Young report commissioned by Michelin found that changing tyres at 3mm instead of 1.6mm would cost European Union drivers an extra E6.9 billion a year in unnecessary tyre purchases and additional fuel consumption.

Changing tyres too early would result in 128 million additional tyres being used a year in Europe – which would cause nine million tons of additional CO2 emissions every year.

Instead, Michelin is calling for a change to the tyre testing regime to reflect wet braking performance at 1.6mm. Although all tyres legally sold in Europe must meet a minimum standard for wet braking when new, Michelin tests have shown that the wet braking capabilities of some tyres reduce quickly when worn, and may fall below this ‘minimum standard’ requirement.

In response, the tyre specialist is calling on industry test bodies and consumer organisations to start comparing and testing tyres when they are worn to the legal limit.

Previous: Today in Fleet: Thursday 18 May
Next: Manifesto Focus: Where parties stand on transport and travel