Used diesel values remain strong with no evidence of ‘punishment’ from buyers. 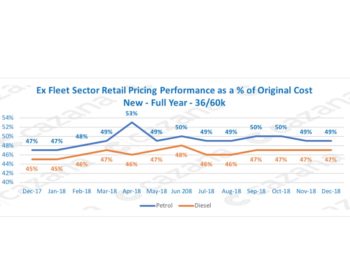 That’s the finding of car valuations specialist Cazana as its data shows that both ex-fleet diesel and petrol values have remained steady over the last year while values for alternatively fuelled vehicles show some fluctuations in response to the lower volume of cars coming through.

According to Rupert Pontin, director of valuations at Cazana, the firm’s chart for ex-fleet sector retail pricing performance as a percentage of cost new gives a very clear and consistent message. Despite anecdotal concerns of difficulties for used diesels, the chart shows that retail pricing performance has followed a similar pattern for both petrol and diesel cars through the course of the year, with petrol values remaining almost consistently two percentage points above those of diesel. A blip in April showed quite an uplift in pricing for petrol cars and a drop for diesel, but is likely to have been the result of a change in volumes being defleeted. 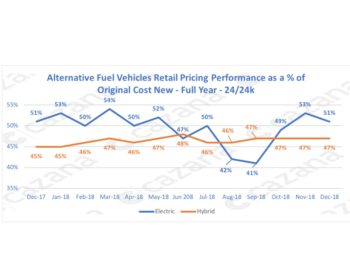 The figures for AFVs show some volatility

Cazana also looked at full-year figures for AFVs, which showed large volatility; said by Cazana to be a direct reflection of the low data points. Pontin noted that many of the changes in retail pricing reflect the type of product coming to the used market and this is dependent on defleet activity. He added that there is greater stability for Hybrid models; due to greater acceptance by the used car consumer as much as it is based on the volume of data and type of car in the market. 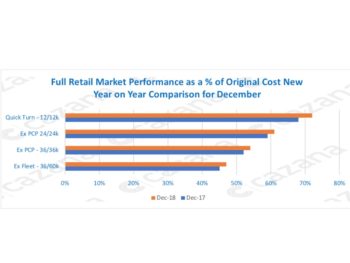 Overall, the firm’s figures for December show that in retail pricing terms the market is stronger than it was last year at all levels with a two-percentage point uplift across the board. This reinforces the view that the market is suffering from a shortage of used car stock. It is also interesting to note that the average cost new price across all profiles, except the three-year 60k ex fleet sector, has dropped by up to 10%, the latter showing a minimal increase.