By Contributor / 3 years ago / Features / No Comments 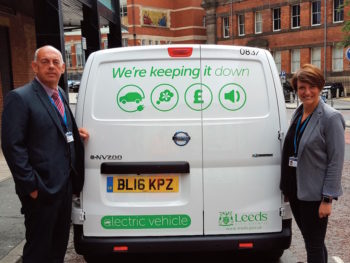 As one of the UK’s 36 metropolitan counties, Leeds City Council serves a population of over three-quarters of a million people. With so many residents to serve, LCC’s decision to begin electrifying its fleet can show other local authorities how electric vehicles are a practical proposition for their day-to-day operations.

Leeds has invested in almost 100 Nissan e-NV200 electric vans. However, the need to keep multiple EVs, used by multiple departments, at multiple sites, constantly charged is a challenge – especially as the authority can’t rely on Britain’s public charging infrastructure. Named Best Ultra Low Emission Fleet at the Energy Saving Trust’s Fleet Hero Awards last year, Leeds has met that challenge head-on with a strategy that is cautious, explorative and cohesive.

Terence Pyecroft, LCC’s head of service, fleet services, explained the process the authority went through to identify where best to located the chargers for its EVs. “Two years ago, we started looking at the fleet, van size and mileage ranges. We picked off various vans with a low enough mileage – vehicles doing 70-80 miles per day, no more – and then looked at the services where the vehicles were housed overnight, the areas where we needed to get the chargers installed.”

A survey of the sites where the EVs would be located suggested that seven depots across the city would need to be fitted with units, with the number of chargers ranging from four up to 20 at one depot. The surveys also identified where the power supply was insufficient and needed upgrading.

“Most of the units were installed by Leeds LBS, which is the construction arm of the authority, but I’ve also used The Phoenix Works, an SME in Leeds. LBS surveyed all the sites I asked them to survey, and did installations at sites: where they felt it was a little awkward or they didn’t have the capabilities, they used the Phoenix Works. It’s been quite simple: you send someone out to do a survey of the site, they send an email back saying that site can cope, they have the power for X and we do the installations.”

A number of council staff also take vehicles home at the end of the working day, or travel around the city, using their home as a base. This being the case, LCC is currently conducting a home charging pilot programme – initially with seven members of staff – to find out if this can augment the workplace charging that the council has installed. This home charging initiative has improved even further the distribution of chargers that the council has at its disposal around the city.

Pyecroft said: “I’ve got lots of different sites. There are the seven major sites, while the rest of them are all over Leeds: the town hall’s got one, the civic hall’s got one and we’re looking at other buildings where vehicles are parked at night. We’ve actually got about 86 chargepoints at the moment. We’re expecting that when the new 51 vehicles arrive, we’ll have about 96 points in Leeds that we control.”

Investing in workplace charging isn’t cheap, but Leeds has utilised OLEV grants to subsidise the cost of installation – both at workplaces and at staff members’ homes. As many of these chargers are the less expensive slow chargers, which fit in with vehicles that are charged overnight, a relatively significant proportion of the installation costs has been recovered – an important consideration for local authorities that have suffered from budget cuts in recent years.

And, with the money running EVs will save Leeds on fuel and maintenance costs, this has to be good news for not just the city’s environment, but also its residents.