Carmakers urged to step up standard fitment of AEB

Thatcham has praised the XC60 – winner of the 2018 What Car? Best Safety Award – as it reiterates its call for other carmakers to fit Autonomous Emergency Braking (AEB) as standard. 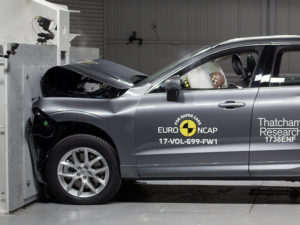 Although the XC60 gained the highest Euro NCAP test score of 2017, the What Car? Best Safety Awards judges – including Thatcham’s director of research Matthew Avery – crowned it the winner of the 2018 title due to its extensive suite of driver assistance systems, including AEB systems which operate at a variety of speeds and driving environments, and can detect pedestrians, cyclists and even large animals. Such wide-ranging technology led to Euro NCAP awarding the Volvo XC60 a score of 95% for its safety assistance features.

Now, Thatcham is challenging other carmakers to follow Volvo’s lead.

Although standard-fitment of AEB on new cars has reached 61%, only three of the SMMT’s 10 best-selling cars in 2017 had AEB as standard across all trims, while the number one seller, the Ford Fiesta, only offers the technology as an option. And overall only 7% of new Ford and 14% of new Vauxhall cars have standard-fit AEB.

“Achieving a five-star Euro NCAP rating without standard-fit AEB will be close to impossible for vehicle manufacturers from 2018 onwards,” added Avery. “Many market AEB as an optional extra but with its potential to save so many lives it is far too important not to be fitted as standard.”

Thatcham Research is also calling upon fleets and private car buyers to play a role by only opting for cars which have AEB as standard or ask that it be added to the overall purchase price.

Avery added: “Drivers can’t rely on manufacturers to deliver AEB on every new car just yet. Until that day comes car buyers should do their research.”

To read Fleet World’s interview with Matthew Avery on the importance of AEB for fleets and the need for differentiation between assisted and automated vehicles, click here.

Previous: What Car? reveals Car of the Year for 2018
Next: TTC drives roll-out of risk management solution