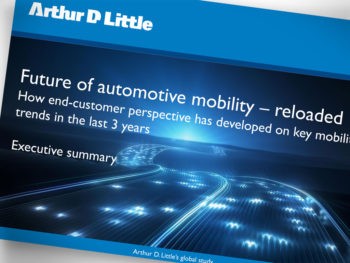 The report concludes that drivers are now much more amenable to adopting electric vehicles, which will impact manufacturer and engine strategies and push more rapid development of infrastructure such as charging solutions.

Despite an obvious move by car and policy makers to embrace ideologies such as car sharing, half of respondents agreed that owning a car was still important – almost the same number as in 2015. Independence, comfort and convenience remained top reasons.

58% of those surveyed were willing to spend more for hybrids and 50% for EVs. Of those planning to replace their car, 48% said they’d consider an EV (BEV, hybrid or plugin hybrid), 36% a petrol-engined vehicle and 12% diesel.

However, the report also highlighted concerns around autonomous vehicles (AVs), with trust in the technology weakening from 64% to 57% of drivers saying they’d use full AVs. 44% said AVs would replace private cars for short, urban trips and 29% replace public transport – affecting city mobility strategies.

Safety was not the major concern, with the report citing data and privacy concerns as being a major reason why trust has dipped; 59% of US drivers said security worries would prevent them using advanced autonomous driving functions.

Wolf-Dieter Hoppe, partner with Arthur D. Little comments: “Drivers in all countries we surveyed except China are becoming much more sensitive around private data. In the long run, protecting this data will become a key competitive differentiator for manufacturers and providers of mobility solutions.”

The ADL Global Automotive Study surveyed over 8,000 drivers in 13 countries – a summary is available here: www.adl.com/FOAM