A campaign is calling for the charge to heavy goods vehicles to reflect their impact on UK roads, the environment and other road users. 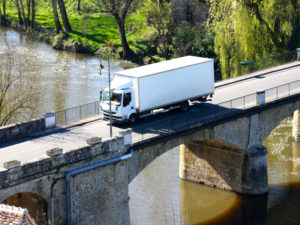 Charging by distance not time is the fairest option for HGV charges, says Campaign for Better Transport

The Campaign for Better Transport claims the current time-based system should be replaced with a distance-based system and has submitted evidence to the DfT consultation on reforming the heavy goods vehicle levy. Chief amongst the benefits predicted by the Campaign include improving HGV efficiency, encouraging take-up of cleaner technology and allowing rail freight to better compete with road freight on price.

The Campaigners claim that the current road user levy does not go far enough to consider the real impact of HGVs on other road users or the road network. The charge was introduced to account for foreign HGV operators using the road network.

Furthermore, the transport charity believes that reforming the levy to a distance-based system would be the most effective way to achieve the Government’s objectives to improve efficiency, reducing exposure to collisions and reducing air and carbon dioxide pollution.

Philippa Edmunds, from Campaign from Better Transport, said: “The existing time-based system has neither led to efficiencies – empty running is now at 30%, the highest level for years – nor a reduction in emissions and collisions in the UK.

“The overwhelming evidence shows distance-based HGV charging systems can reduce lorry miles and therefore reduce congestion, pollution and crashes. Furthermore a distance-based system would make it fairer for rail freight to compete if HGVs were paying a fairer proportion of the costs they impose on the economy and society.”

Last November saw the Government open a call for evidence on reforming the HGV road user levy – as announced in the Spring Budget 2017– “in a way that rewards hauliers that plan their routes efficiently, incentivises efficient use of roads, and improves environmental performance, including air quality and carbon emissions”.