The Government has enlisted the BVRLA to monitor and assess compliance against its Rental Vehicle Security Scheme. 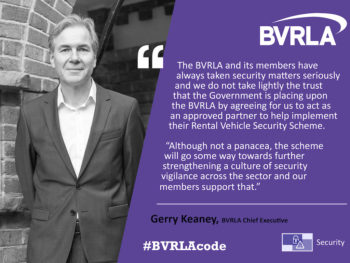 Launched last December, the voluntary scheme aims to increase counter-terrorism awareness across the sector and mitigate the risk of rental vehicles being used as weapons in acts of terror.

The scheme was developed in collaboration with the BVRLA and other key industry partners and introduced some eight months after the BVRLA urged the Government to support the idea of an industry-led compulsory national accreditation scheme as it warned that vehicle terrorism was a key challenge for the rental industry.

Since then, the BVRLA has incorporated the scheme’s requirements into the association’s mandatory Code of Conduct, which means that as of 1 January 2020, its 455 rental and commercial vehicle member organisations will automatically be part of the scheme.

Monitoring compliance with the scheme will form part of the association’s existing governance programme, which involves a robust inspection regime to ensure that members adhere to the BVRLA Code of Conduct.

BVRLA chief executive Gerry Keaney said: “The BVRLA and its members have always taken security matters seriously and we do not take lightly the trust that the Government is placing upon the BVRLA by agreeing for us to act as an approved partner to help implement their Rental Vehicle Security Scheme.

“By making this part of our mandatory Code of Conduct, we are taking an industry-led approach, and although it will not be a complete panacea, the scheme will go some way towards further strengthening a culture of security vigilance across the sector and our members support that.

“We will continue to work with government and law enforcement to explore more opportunities to further counter the threat of terrorism.”

Transport Parliamentary Under Secretary of State, Baroness Vere said: “It is critical that businesses across the UK are vigilant when it comes to matters of security, and this vital scheme plays an important part.

“By making sure rental firms do proper checks on customers, we can reduce the risk of vehicles being used to cause harm. I’d like to thank the sector for everything they are doing.”