The fleet industry is mourning the loss of Freddie Aldous, hailed by the British Vehicle Rental and Leasing Association (BVRLA) as a pioneer and innovator. 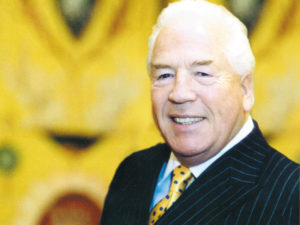 A legendary figure within both the BVRLA and the European Car and Truck Rental Association (ECATRA), Aldous led a long and distinguished business career from early days in finance house UDT followed by Swan Self Drive, a small rental company and then Swan National which later became Eurodollar.

Within the BVRLA, Aldous held various roles as rental committee chairman, chairman (twice and the only person ever to be elected for a second term), then president and in 2004 he was awarded the honorary life president title as a mark of the industry’s respect for him.

Aldous also made a heavy commitment to his work for ECATRA and held the role of president for 17 years, carrying out many significant changes including relocating its headquarters from Germany to a more appropriate home in Brussels.

Aldous was also highly regarded for his strong management philosophy which he applied not only to himself but to his staff, no matter where they fitted into the organisation. “Motivate your staff at all times – make them feel they have an important role within the company. Never forget we are in a service industry and therefore high standards of service are paramount. Finally, enjoy your work.”

Speaking yesterday at the BVRLA Parliamentary Reception, chief executive Gerry Keaney said Aldous was “an icon of the sector”.

Keaney added: “He was a visionary in this sector and when one looks back at some of the activities he did in terms of focusing on customer service, a passionate enthusiasm for the business and for motivating staff. These really distinguished him as a key operator for over 50 years. He was also a visionary in representing our sector more widely, both beyond his company, he was one of, if not the, founding father of the BVRLA.”