Longer lease lengths are increasingly proving popular amongst business car buyers amidst Brexit and the general new car market uncertainty, new data from Leasing.com suggests, but there has only been a marginal shift by contrast to private buyers. 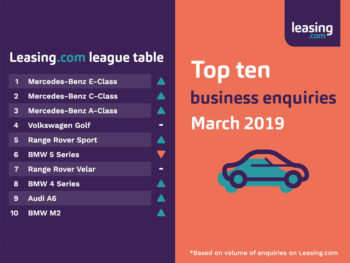 The figures demonstrate that despite Brexit uncertainty, business enquiries on Leasing.com have largely unchanged during the past year, whereas private buyers appear to be dissuaded from taking out lengthier leases.

Mercedes-Benz remains the most popular brand to lease for businesses, according to Leasing.com’s league table that looks at the volume of enquiries it receives, with the E-Class, C-Class and A-Class ruling the roost, followed by the Volkswagen Golf in fourth.

Paul Harrison said: “Mercedes-Benz continues to shine thanks to a wide range of vehicles at extremely attractive monthly prices. The brand’s line-up is more varied than ever, and we expect Mercedes-Benz to do well throughout 2019.”