Business mileage continued to rise in July, showing that the economy is benefiting from the ongoing easing of government restrictions, albeit at a lower rate than seen in June. 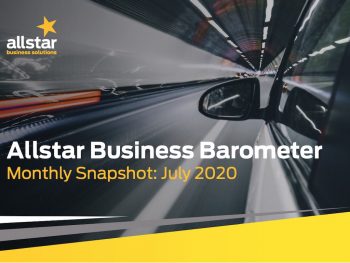 The latest Allstar Business Barometer suggests that economic activity continued to recover in July but at a slower rate; likely the result of the summer holidays

Allstar’s latest Business Barometer Monthly Snapshot, which tracks business mileage and credit card data as an economic indicator of sector recovery, shows a total of 1.56 billion extra miles were travelled by businesses across the UK in July, a 14.4% month-on-month increase. It does, however, show a softening from the 30.2% growth recorded the previous month; likely the result of the ‘Summer Holiday Effect’.

Compared to the baseline at the start of lockdown (w/c 6 April), fuel consumption had increased by 122% across all businesses by the last week of July – up from 109% in late June.

Allstar said the figures, based on data from more than 50,000 companies, paint an encouraging picture of the UK economy bounce-back, but show that the rate of increase has steadied, as opposed to the dramatic surge seen in May and June.

They also reinforce predictions earlier this month by the Bank of England that the economic shock triggered by the pandemic will be less than initially feared but the bounce-back may take longer.

The data also suggests that the overall upward trajectory has been interrupted in selected sectors by the start of the school summer holidays. Education was most impacted, dropping from a peak of 216% growth against its ‘peak lockdown’ April baseline in mid-July to 159% by the end of July.

Meanwhile, real estate, agriculture and construction’s rate of decline was more subtle, dropping by 8%, 1% and 1% respectively. Industries benefitting most from the start of the summer holidays include arts, recreation and entertainment (growth rate rising by 19%) and wholesale and retail (up 8%).

Paul Holland, MD of UK fuel at Fleetcor, Allstar’s parent company, said: “The Bank of England predicted that the economic shock triggered by the pandemic was less than initially feared but the bounce-back may take longer and this fuel consumption data appears to illustrate this. The sectors impacted hardest by lockdown are showing signs of reactivation, albeit with growth continuing at a steadier rate than when restrictions first began lifting.

“It’s not surprising that the upward trajectory has been affected by the start of the school summer holidays; this is a trend we see from our business customers each year. And whilst it is possible that further slowing of the recovery will continue throughout August as workers take holidays delayed from earlier in the year, we are in unchartered territory and the traditional seasonal downturn may be offset by the return of furloughed employees.”

Allstar also pointed to data on business credit card usage to highlight the continued economic recovery, as spending in July reached 82% of its Q1 average. There was also a switchback to more typical pre-lockdown behaviour; in late July, in-person card transactions overtook e-commerce transactions for the first time since lockdown began. By w/c 27 July, in person card transactions represented 52% of all transactions (compared to 48% via e-commerce), a flip on the ratio of 33%/67% seen in March. There was also a 104% increase on spend in restaurants in July, compared to June, and 42% increase on spend in hotels.