Traditionally buoyant in April, the used car market was hit by Brexit uncertainty as well as unseasonably sunny weather over Easter, bringing a more challenging month.

According to Rupert Pontin, director of valuations at Cazana, the Easter weekend, for many dealers, saw sales levels over the weekend considerably lower than expected and as such performance concerns ran high for the month as a whole.

The new car market was also tough in April and the drop in registrations of 4.1% came predominantly from the private market.

Pontin added: “Like it or not the country appears to be in the grip of Brexit and concerns really are impacting all retail markets that sell ‘big ticket’ items. UK consumer confidence levels remain at almost the lowest point for the last year with little hope of improvement.”

However, despite the growing shift in the market, real-time used car pricing data shows remarkable resilience at the moment. 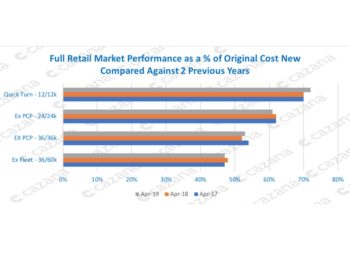 The figures show the higher-mileage ex-fleet sector has taken a drop in April even though volumes in the used car market for the month were still purported to be lower than expected; suggesting that retail consumers are happier buying a lower-mileage car for the time being. 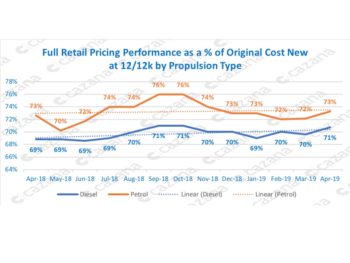 It reveals that the overall two percentage point increase in retail pricing identified in chart 1 is not reflected in both fuel types; in fact, it is diesel cars that have driven the overall increase in the data. Generally speaking both fuel types have followed the same market pattern too, although there has been greater stability around the diesel market. It also confirms that there is still strong demand in this age and mileage profile for this type of vehicle.

Pontin added that it’s wise to factor in that this sector has benefited from a lower volume of product being pushed to the market. There is a hiatus in used car pricing in September and October just at the point that the introduction of WLTP was having its biggest impact on new car registrations due to restricted supply and at the same time minimising pre-registration activity and thus pressure on late-plate retail pricing.