Motorway service stations and large fuel retailers will be required to install EV charge points under legislation planned for in the Queen’s Speech. 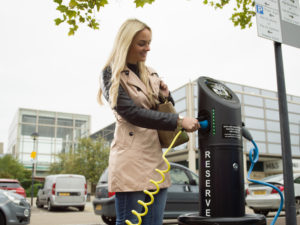 The Automated and Electric Vehicles Bill sets out a number of measures including moving towards a set of common technical and operational standards for EV charging, such as common connectors and accessibility, in line with government plans for “almost every car and van to be zero-emission by 2050.”

Tim Payne, chairman of charging point company, InstaVolt, welcomed the news: “Considering a large percentage of the population is unable to charge EVs at home, it’s never been more important to create an easily accessible public charging infrastructure. Today’s news will go some way to doing that and ultimately help encourage greater take-up of electric vehicles.”

The Bill also confirmed legislation to “extend compulsory motor vehicle insurance to cover the use of automated vehicles, to ensure that compensation claims continue to be paid quickly, fairly, and easily, in line with longstanding insurance practice”. This follows new insurance proposals set out for self-driving cars as part of the Vehicle Technology and Aviation Bill earlier this year, proposing that a single insurance product must cover autonomous vehicles for both the motorist when they are driving and the car when it is in automated mode.

A separate Civil Liability Bill, included in the speech, will crack down on fraudulent whiplash claims and is expected to reduce motor insurance premiums by about £35 per year. This would ban offers to settle claims without the support of medical evidence, and introduce a new fixed tariff of compensation for whiplash injuries with a duration of up to two years.

James Dalton, director, general insurance policy at the Association of British Insurers (ABI), said: “Millions of motorists will welcome the Government’s commitment to further tackle the compensation culture that is contributing to rising motor insurance premiums. We have been pushing for further reforms to ensure proportionate compensation for lower-value whiplash claims, and it will be important to strike the right balance between the interests of claimants and those of premium paying motorists. This Bill also offers an opportunity that must be seized to reform the Discount Rate used to calculate personal injury compensation awards.”

And the Queen’s Speech also saw the announcement that a new Bill will also be brought forward to deliver the next phase of high-speed rail.