BP Chargemaster has activated the first of its new 150kW ultra-fast chargers, which are planned for roll-out across the UK. 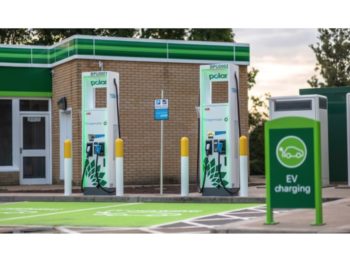 Two of the new chargers have been installed at BP’s forecourt at Cranford near Heathrow airport, west of London and began operation this week. Said to be the first 150kW-capable units to be built in the UK, the chargers can deliver around 100 miles of range in 10 minutes to compatible vehicles.

Tufan Erginbilgic, chief executive of BP’s Downstream business, said: “Convenient and reliable ultra-fast charging will be critical in driving the wider adoption of electric vehicles in the UK. The combination of BP Chargemaster’s EV charging expertise, experience and customer base with BP’s retail sites across the UK is now allowing us to develop the UK’s first nationwide network of ultra-fast chargers.”

The news comes as Nissan analysis shows there are now more EV chargers in the UK than fuel stations.

According to David Newton, chief operating officer of BP Chargemaster, the firm’s establishment of a nationwide ultra-fast charging network will be “transformative for the electric vehicle market in the UK”.

He added: “Working closely with global vehicle manufacturers, we are developing the solutions that electric vehicle drivers need to enable them to charge confidently and conveniently, wherever they are in the country. BP’s forecourts are ideal locations for this technology, which will provide an expected dwell time of 10-12 minutes, not dissimilar from the average of around seven minutes spent by drivers of petrol and diesel cars on a forecourt today.”

BP Chargemaster has also committed to introducing contactless payment on all new rapid and ultra-fast chargers, and retrofitting its existing UK-made rapid chargers over the next 12 months.