BMW reveals EV concept and roadmap prior to Frankfurt

BMW’s future EV strategy will see the group offer 25 plug-in hybrid and fully electric models by 2025, including a new fully-electric four-door saloon that will debut at next week’s Frankfurt Motor Show. 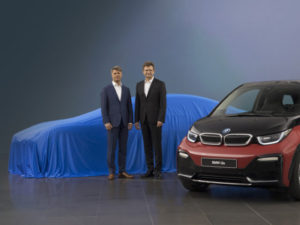 Harald Krüger, Chairman BMW, and Klaus Fröhlich provide an outlook on the IAA 2017

Revealed in a video hosted by the brand’s German press site, the concept – which will sit between the i3 and i8 – has been heralded by chairman Harald Krüger as a “significant milestone in our roadmap for e-mobility”, adding: “It is a vision we want to realise in the foreseeable future. And a further step in our commitment to sustainable mobility.”

Announcing details of the group’s EV roadmap, Krüger reiterated the brand’s focus on offering all types of drive trains in all vehicle classes, with customers from 2020 able to choose between increased-efficiency combustion engines deploying 48-volt mild hybrid systems, plug-in hybrids, and all-electric battery-powered vehicles. These will make use of the group’s modular systems for powertrains and bring electric-only ranges of up to 700km (435 miles) for fully electric vehicles and up to 100km (62 miles) for PHEVs. 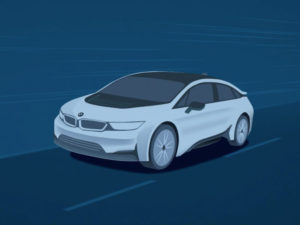 He added: “Customers all over the world will prefer different types of powertrain for a very long time.”

Frankfurt will also see the group reveal the MINI Electric Concept – the forerunner to the first series production electric MINI, due in 2019, some 10 years after the carmaker tested its MINI E – as well as the fully electric BMW X3 due by 2020 and Concept X7 iPerformance plug-in hybrid large SUV. Also appearing will be the autonomous and electric iNEXT, developed in partnership with Intel and Mobileye and due by 2021 when it will debut Gen 5 fully electric drivetrains and help spearhead the move to full autonomous operation in levels 3-5.

By 2025, the group expects 15-25% of its global sales to be plug-ins, though it has said that will depend on incentives and demand.