BMW has revealed its Vision iNext concept car, which will inform its future iNext electric SUV. 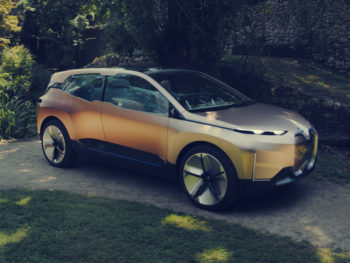 Described as providing the building blocks for the future of the BMW Group, the iNext project evolves the brand’s current ‘i’ electric line-up to incorporate autonomous competencies.

The production iNext, due to start production in 2021 following the launch of the iX3 in 2020, will serve as a new technology flagship and the BMW Vision iNext previews how it might look.

The four-seater concept adopts BMW i styling already seen on last year’s i Vision Dynamics concept, including a bolder version of the brand’s kidney grille, and features rear-hinged doors at the back, 24-inch wheels and a panoramic roof.

The interior on the concept flips between two separate ‘Boost’ and ‘Ease’ driving and autonomous functions.