The BlueCity electric car sharing scheme has officially launched in London following a pilot in Hammersmith and Fulham. 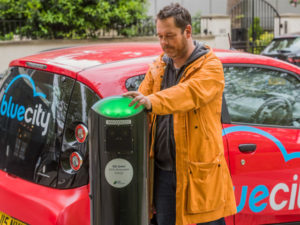 Operated by BluepointLondon, which is part of the Bolloré Group, the scheme started last December with 10 cars and has now also expanded into Merton and Hounslow, with a total of 30 Bolloré BlueCars now available and plans to have up to 50 cars in circulation by the end of the summer.

Drivers in these boroughs can benefit from 12 months’ free subscription and free rental hours – normal subscription costs £5 a year, with usage billed at 17p per minute, with a minimum charge of 20 minutes.

Vehicles can be reserved using the Bluecity app and returned to any location. The app can also be used to reserve charge points – which are part of the Source London network – along with in-car buttons.

In Paris, the Autolib’ electric car sharing scheme also operated by the Bolloré Group has seen 340,000 members join since its launch in 2011, with 15,000 journeys per day undertaken using the service.