Birmingham first Clean Air Zone is now live (1 June), and will soon charge drivers of older cars and vans £8 per day to enter a section of the city centre within the Middleway Ring Road. 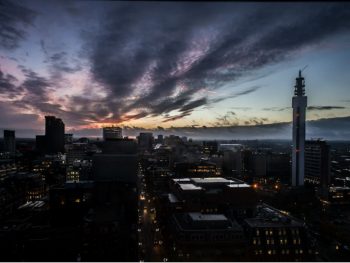 Delayed by the Covid-19 pandemic, the zone applies 24 hours per day, 365 days a year and – like the London Ultra-Low Emission Zone – it applies to petrol cars and vans which do not meet the Euro 4 standard and diesels which are not compliant with Euro 6.

As these standards were apply to new cars from 2005 and 2014 respectively, and a year later for vans, most fleet vehicles should be exempt. However, research by the AA has highlighted that an estimated 100,000 vehicles – 23% of those licensed within Birmingham – will be affected.

The zone launched with a display at the Library of Birmingham, emitting smoke from a viewing platform and roof, representing the resulting NOx emissions savings from the scheme. Charging will begin on 14 June, aimed at giving drivers time to familiarise themselves with its layout.

Councillor Waseem Zaffar MBE, Cabinet Member for Transport and Environment at Birmingham City Council, commented: “This is a bold move that will help to address some significant health inequalities in our city. This is also an important step in encouraging people to re-think how we all move around the city.

“I’m confident that this initiative will save lives, and provide a cleaner, greener, safer space for our communities in a part of our city that has a problem with poor air quality.”

However, the AA has warned of flaws with the scheme, including the likelihood of catching out visitors not used to its location and the inclusion of deprived areas within the zone. The organisation is suggesting expansion of park and ride schemes, removal of VAT from electric vehicles and measures targeting the worst polluters should be considered first.

It also advises that Clean Air Zones should offer first-time warnings for drivers of non-compliant vehicles, rather than charging them. This includes those visiting Birmingham Children’s Hospital, which is within the zone.

AA president, Edmund King, said: “Poor air quality is a threat that the majority of drivers agree needs to be addressed and reduced; in due course electric vehicles will largely eradicate those emissions. However, the car CAZs in Bristol and Birmingham and the extended ULEZ in London are very blunt tools that create a tax burden for low-income families and workers.

“These drivers are least able to afford to replace the vehicles they depend on for work, often night shifts, and sometimes emergencies such as going to hospital or health care centres. They are also the ones least able to pay the fines. Studies have indicated that approximately 10% of ‘gross polluters’, that tend to be older lorries, buses or badly serviced cars, cause 50% of the problem. Rather than hitting thousands of car drivers it would be more effective to target the gross polluters.”

Birmingham’s scheme closely follows a charging Clean Air Zone in Bath, launched in March. With further zones planned for Bristol, Bradford, Portsmouth, Greater Manchester, Newcastle, Gateshead and North Tyneside, and London’s Ultra-Low Emission Zone (ULEZ) due to be extended to a much wider area in October 2021, the BVRLA is offering a guide to help businesses understand what the changes mean for businesses.