With 8.66m cars registered between January and June 2018, the European car market recorded its best H1 performance of the century, according to figures from Jato Dynamics. 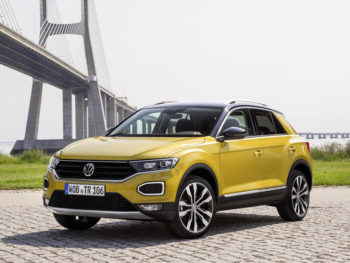 The Volkswagen T-Roc was the standout amongst the newest launches, recording 71,000 registrations and becoming the 32nd best-selling car in Europe

The figures are despite continued uncertainty in the UK market, which was down 6.3% on H1 2017, whereas growth recorded in Germany, France and Spain kept the overall European rise high. This was aided by midsize markets the Netherlands, Poland and Sweden, while smaller markets Hungary, Greece, Romania, Croatia and Lithuania all posted significant sales increases.

“It was certainly a good first half for the European market and this is due to the choice that consumers now have. Car makers continue to update and modernise their traditional models, while the range of SUVs on offer continues to grow and appeal to all kinds of budgets and needs. The diesel crisis certainly affected the speed of growth in the market, but consumers are overcoming this by turning to more attractive gasoline and AFV solutions,” explains Felipe Munoz, JATO’s global analyst.

As for diesel, registrations were down 17% during the first six months of 2018, Jato Dynamics data revealed, and the fuel now accounts for 37% of the total market – its lowest share since 2001.

By contrast, alternative fuel vehicles including electric, hybrid and plug-in hybrid posted a 31% increase, rising to make up 5.4% of the total with 450,200 vehicles registered. However, smaller markets saw the highest growth while larger markets continue to observe relatively slow adoption. For example in Norway, AFVs now account for 56% of the market, compared to 3.4% in Germany.

Meanwhile, SUVs continue to prove their popularity with customers who bought 2.92m across the European region, marking a 24% growth in H1 and 30% in June. 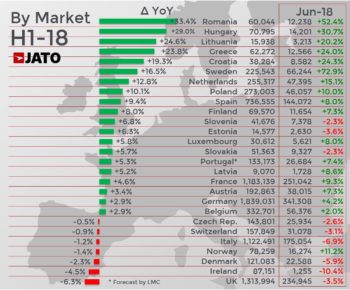