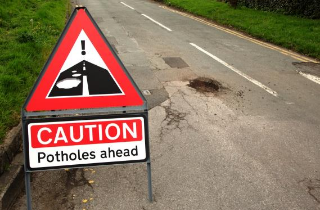 In his speech George Osborne confirmed an overall £15 billion of investment in the Roads Investment Strategy period and also reiterated the statement in the Summer Budget that that future roads investment will be underpinned by a new Roads Fund paid for directly from the revenues of Vehicle Excise Duty from 2020-21. It added that an “ambitious” second Roads Investment Strategy will be published before the end of this Parliament setting out how the Roads Fund will be invested.

London will get an £11 billion investment in support for transport infrastructure, helping delivering Crossrail, new trains on the London Underground, station upgrades, new buses, and a network of Cycle Superhighways.

The Government will also provide up to £250m for a major new permanent lorry park to increase resilience in Kent, by taking pressure off the roads in the event of Operation Stack. The government will consult on a preferred site at Stanford and other alternatives shortly

And a new ‘permanent pothole fund’ was also announced, giving £250m over the next five years.

However, the Government also announced that day-to-day spending in the Department for Transport will be cut by 37% but said capital funding of transport projects would rise by 50%. The Chancellor also announced that spending on the new catapult centres, including the Transport System Catapult, will increase.

Steve Gooding, director of the RAC Foundation, said: “The extra £50m per year for road maintenance won’t clear the pothole backlog which the government itself puts at £8.6 billion but any extra money is welcome.

“After decades of dithering it is pleasing to see £250m allocated to keep Kent’s roads clear when there is cross-channel disruption. HGVs should be parked up in permanent sites not on the motorways.”