A Lexus LS fitted with Toyota’s autonomous driving technology is to start trials on public roads in Brussels. 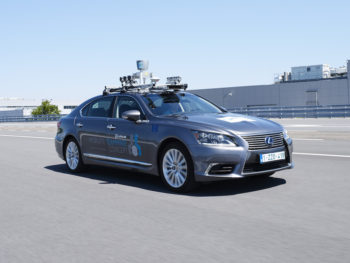 The 13-month programme will see the LS make repeated journeys around a fixed route in the Belgian capital, following successful simulations and trials on closed circuits and previous public road tests in Japan and the USA.

The LS on trial is a standard production model that’s then been fitted with a roof-mounted array of sensors, including LIDAR (laser imaging detection and ranging), radars, cameras and a high-precision positioning system. A safety driver travels in the car and can intervene and overrule the autonomous vehicle control system at any time, accompanied by an operator who will supervise the entire system.

The research has been carried out as part of Toyota’s ‘Ever Better Mobility for All’ global vision, which portrays the relationship between driver and car as teammates working together; an approach to mobility it has dubbed the Mobility Teammate Concept. With the aim of realising safer and more accessible mobility, it is working on two different automated driving models in parallel: Guardian and Chauffeur. Guardian mode uses technology to constantly monitor the human’s driving task, intervening only when necessary. In Chauffeur mode, the technology takes all responsibility for driving.

The automated vehicle will also be used to collect data as part of Toyota’s involvement in the European L3Pilot project; a four-year European project, launched in 2017 and partly funded by the European Commission, which paves the way for large-scale field testing of around 100 autonomous cars and 1,000 drivers across 10 European countries.