The first public trials of autonomous vehicles have begun in Oxford, bringing a fleet of six Mondeos to the roads under the Project Endeavour consortium. 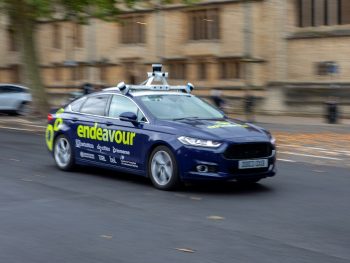 The Government-backed R&D project is intended to help advance the deployment of commercial autonomous vehicles in the UK and will run until autumn 2021, including live tests in three major UK cities to demonstrate autonomous driving in a variety of urban and city environments.

This includes the Ford Mondeo vehicles in Oxford. Equipped by Oxbotica – one of the project partners – to be capable of Level 4 autonomous driving, the vehicles will complete a nine-mile round trip from Oxford Parkway station to Oxford’s main train station, including day and night-time journeys to cover a range of traffic scenarios and weather conditions.

The project will also develop engagement models with local authorities and communities to help them prepare for the future launch of autonomous vehicle services.

The consortium, which is part-funded by the Centre for Connected and Autonomous Vehicles (CCAV) and delivered in partnership with Innovate UK, first launched in September 2019 with participation from DG Cities and transport simulation company Immense, alongside Oxbotica.

Three new consortium partners have since joined: the Transport Research Laboratory (TRL), the British Standards Institution (BSI) and Oxfordshire County Council. The new partners will focus on the development of a new safety assurance assessment scheme against PAS 1881 standard for public autonomous trials, intended to bring a consistent approach to safety.

Camilla Fowler, head of automation at TRL, said: “Trials of Level 4 vehicles are an important milestone, keeping the UK at the head of the field in bringing the benefits of this technology into mainstream use. These exciting trials, and what we learn about assuring safety and encouraging interoperability will open up new opportunities for many more research demonstrations across the UK, which are the forerunners to the full-scale public trials so eagerly awaited.”

The trials start some two months after the Government opened a consultation on the use of Automated Lane Keeping System (ALKS) on UK motorways, in order to help take a major step forwards for autonomous driving technologies.

Dr Graeme Smith, senior vice president at Oxbotica and Project Endeavour consortium director, said: “The first live on-road public trials mark a key landmark for Project Endeavour as we work with local authorities and members of the public in London, Oxford and other major UK cities to shape the future of mobility. Alongside our valued partners, we’re making autonomous vehicle services an everyday reality, right here in the UK.”