More than 14 million cars are expected to take to the country’s major roads over the coming bank holiday, potentially increasing journey times fourfold for some routes. 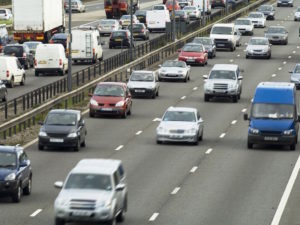 RAC research shows 3.6 million cars are expected to make journeys on Friday and Saturday. Thursday is estimated to be the next busiest with 3.2 million cars, followed by the bank holiday Monday with 2.4 million. Sunday is forecast to be quieter with only 1.6 million leisure trips being made.

The organisation warned that probably the single biggest motorway hotspot in the summer months is the Almondsbury interchange at Bristol, right by the RAC building, where the M5 and the M4 meet.

Data from transportation analytics specialist Inrix indicates that the M5 will be worst hit on Friday between J4 and J1 from 9.30am to 2pm with travel times increasing from 21 minutes to 1 hour 21 minutes. Inrix data has also found the M1 is expected to be badly affected on Saturday with journey times increasing from a typical 16 minutes to 62 minutes from J22 to J25.

Inrix data scientist Josh Kidd said: “The best general advice to anyone driving to spend some time away from home this weekend is to travel as early or as late in the day as possible in an effort to avoid the worst of the traffic. However, on Friday, the joint busiest day this weekend, our data suggests drivers should set off between 10:00 and 13:00 to avoid clashing with commuters and other people planning a bank holiday getaway.”

Previous: VWFS dealer sales give ‘last chance to buy’
Next: UK fleet replacement cycles much shorter than in Europe