Audi has taken the wraps off its revised A5 range, which will introduce updated design, revised engines with mild hybrid tech and new infotainment features. 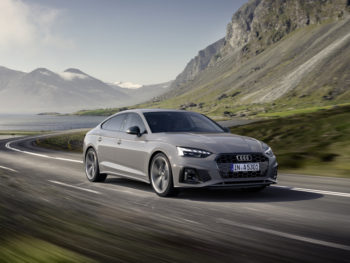 The reworked Audi A5 Sportback

Running across the Sportback, Coupé and Cabriolet models, the updates are in line with the recent revisions to the A4 line-up and will bring a range of TFSI and TDI engines with outputs ranging from 163hp to 347hp. This will include four mild hybrid variants, including four-cylinder engines with the MHEV system integrated into the 12-volt electrical system, while the S TDI models use a new 48-volt main electrical system.

The mild hybrid system can bring minor improvements to fuel consumption – Audi figures for the S5 TDI indicate the technology can reduce fuel consumption in everyday operation by up to 0.4 litres per 62 miles – while also bringing improved start-stop range that now kicks in at speeds of 13mph and below and delivers quicker and smoother restarts.

The S TDI engines also mark the first time TDI power has been used for the S5 Coupe and Sportback, making use of a 3.0 TDI that offers acceleration from 0 to 62mph in under five seconds and an electronically limited top speed of 155mph, married up with an eight-speed tiptronic and permanent quattro all-wheel drive along with S sport suspension which is also available with the option of damper control.

All A5 models are equipped with an automatic transmission, either a seven-speed S tronic or an eight-speed tiptronic. The three most powerful engines in the range work with quattro drive as standard and the system is also available as an option for the mid-range units.

Suspension has been set up with an underlying emphasis on comfort but still with a sporting bias, while tauter suspension and controlled damping are available as options depending on version. The latter is integrated into the Audi drive select dynamic handling system – which comes as standard on all UK A5 models – as are the steering, automatic transmission and engine management.

All models also feature the top-end MMI navigation system plus infotainment control centre as standard in the UK. This incorporates new functions to enhance navigation, including the ability to suggest routes based on routes previously driven. An upgradable three-month subscription basis for the Audi connect infotainment services brings features such as news, Google Earth mapping and Street View and flight, weather, traffic and fuel pricing information. The Audi connect plus portfolio enhances this with additional Car-to-X services, such as online traffic sign and hazard information, an on-street parking search function and Audi’s newly introduced traffic light information functionality; launched by the brand in Ingolstadt this summer.

All new A5 models also get the all-digital Audi virtual cockpit plus, bringing a 12.3-inch display with full HD resolution that can be accessed using the multifunction steering wheel with a choice of three views. A head-up display that projects important information into the driver’s direct field of view is also optionally available.

The revised A5 range will become available to order in the UK in late 2019 while first deliveries start in spring 2020.