Audi is introducing a new global naming strategy for engine derivatives starting this autumn to denote engine output rather than capacity in line with the move to hybrid and electric drive models. 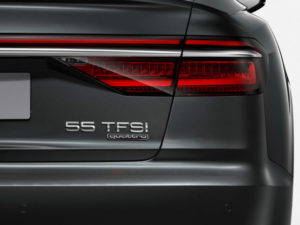 Applicable to all engine types, the new structure is intended to bring a clearly defined hierarchy in each model series and will use a combination of two numbers to denote specific power output based on kilowatts (kW).

The system kicks off by using the ‘25’ sub-classification for models with 70 kW (94bhp) output – namely the A1 25 TFSI, in the UK and other markets where the model is offered. The classifications then increase in increments of five, for example the designation ‘30’ will appear on the rear of all models with power outputs of between 81-96 kW (109-174 Bhp), rising to the top-level ‘70’ classification for models above 400 kW (536 Bhp). The numerals will still appear alongside the TFSI, TDI, g-tron or e-tron designations.

The structure will then be rolled out across the model range with the exception of performance S and RS models and the Audi R8, which Audi says will retain their current names in reference to their range-topping positions.

Although the move could spell confusion for both fleet and retail buyers, Matt Freeman, managing consultant at cap hpi, greeted the change, commenting: “As more brands offer an increasing number of so-called Alternative Fuel Vehicles, a system that takes account of all the options in a vehicle range is a logical move.

“It may take time for fleets and user-choosers to get used to the change, but with hybrid, plug-in and electric vehicles becoming increasingly common, this new system should allow consumers to make a clearer comparison across powertrains.”

Previous: One month left to apply for a Fleet Hero Award
Next: UK fleets still exposing themselves to risk