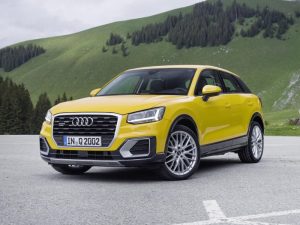 UK deliveries of the Audi Q2 will begin in November.

Smaller than an A3 but bigger than an A1, and taller than either, the Q2 will rival the MINI Countryman as well as top-spec versions of cars such as the Nissan Juke, which are a similar size.

Audi will offer the newcomer in the familiar SE, Sport and S line trim levels, with the mid-spec version expected to be the volume seller. All versions include Apple CarPlay and Android Auto with Bluetooth connectivity, Sport versions include larger wheels, selectable drive modes, cruise control and the SD card navigation system which is a £600 upgrade for the SE.

Later this year, the range will gain a 113bhp 1.0 TFSI – the same three-cylinder engine used in the A3 – which could offer similar CO2 emissions to the equivalent diesel. This will be priced from £20,230 and available on the SE and Sport trim levels, but not as an S line. Two versions of the 2.0 TDI engine, producing 148bhp and 188bhp and both available with quattro four-wheel drive, will also join the range in the coming months.

UK deliveries will begin in November.