Deposits are now being taken for Audi’s fully electric e-tron SUV ahead of its launch later this year. 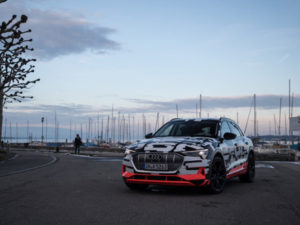 The Audi e-tron prototype in Geneva

Providing a rival to the Jaguar I-Pace, the e-tron Quattro was revealed in concept form at the Geneva Motor Show and will bring a claimed range of 500km (311 miles) along with four-wheel drive and 150kW fast charging capabilities.

It’s also the first Audi to be built on the VW Group’s MEB (modular electrification toolkit) platform, which is being used to underpin various electric vehicles from the carmaker – including the forthcoming Volkswagen Vizzion luxury electric saloon, also shown at Geneva. In total, more than 20 electric cars and plug-in hybrids will join the Audi range by 2025, including the launch of the A8 plug-in hybrid this year.

No further details on the e-tron have been released, which is currently entering final testing – a total of 250 e-tron prototypes will cover more than three million miles on four continents as part of the car’s final test programme.

The £1k deposits for the e-tron quattro can be made online or in dealers and will enrol drivers in a Priority Order Members Club that will entitle them to be the first to order the series production model while also giving them access to regular updates on the model’s production and invitations to special preview events.

They will also receive details on final UK pricing and specification when the priority ordering system is activated.