Audi and SEAT to restart production in Europe

Audi and SEAT are to gradually resume production in Europe – the focus being on a “safe, working environment”. 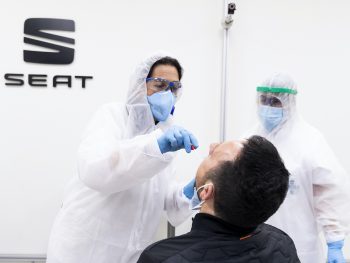 SEAT will perform more than 3,000 tests per week across three sites

Production for both brands was halted mid-March, in response to the pandemic itself and the resultant drop in demand.

The restart of production is being coordinated with the Volkswagen Group – Volkswagen Passenger Cars has already restarted production this week while the commercial vehicles brand will start from 27 April, backed by a comprehensive package of measures.

SEAT is restarting production from 27 April, initially one shift at each of the three lines at Martorell where the Ibiza, Arona, Leon and Audi A1 are normally manufactured; during the outbreak, the plant has been put to use to produce ventilators.

During the first two weeks, the company will produce around 325 cars a day. From 11 May, two production shifts will be working on each of the lines, enabling the manufacture of around 650 cars a day. It will then ramp back up to full production during June.

Returning employees will be tested at on-site medical facilities before entering the building. The PCR (Polymerase Chain Reaction) tests screen for the SARS-CoV-2 virus and are said to be one of the most reliable ways to identify whether the person screened has contracted the Covid-19 virus. SEAT says it’s the first company in Spain to do this testing.

In addition to the PCR testing, the production lines will be adapted to ensure that all employees can maintain the prescribed two-metre social distancing rules. If an employee’s workspace does not allow this distance, additional measures to ensure personal health and safety will be provided.

All workers will receive surgical masks and have hand sanitiser gel at their disposal.

Vehicle production at the Audi sites will be gradually ramped up from the end of April onwards according to a fixed plan. Engine production in Győr already started gradually ramping up again this week. For those employees at the factories in Germany who will only be able to resume their work fully in later phases of the restart, short-time working regulations will continue to apply until then.

The restart will be accompanied by a comprehensive package of measures to protect employees. This includes, for example, clear rules on distance and hygiene, a modified shift system to avoid contact, and the obligation to use mouth and nose protection in areas where distances of 1.5 metres are not possible.