Audi is adding to its A3 plug-in hybrid line-up with a new more powerful version. 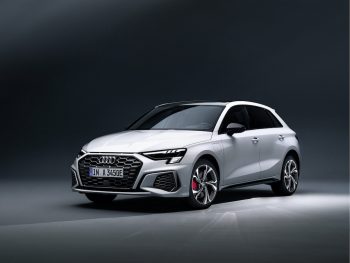 The electric motor is paired up with a six-speed S tronic transmission and is powered by a 13.0kWh lithium-ion battery, which can be charged at a maximum of 2.9kW, giving a 0-100% charge in around five hours using a domestic AC wallbox charger. It offers a 37-mile electric-only range with an official fuel economy of 235.4mpg and CO2 output from 29g/km, giving a Benefit-in-Kind taxation rate of 10%. This compares to 41 miles, 282.5mpg, 31g/km of CO2 and 6% BiK for the lower-powered TFSI e

Four driving modes are offered: Auto Hybrid – which is the main operating mode – plus Battery Hold, Battery Charge and an EV mode.

Thanks to its increased performance, the new plug-in hybrid will be positioned as a S line Competition model, complemented by exclusive specification including black styling package and graphite grey alloy wheels with red brake calipers.

Director of Audi UK Andrew Doyle said the additional TFSI e S line Competition model “promises to broaden appeal through even stronger performance, without appreciably eroding the fundamental efficiency of the concept and the attractive BiK proposition it consequently presents for business users”.