Key fleet models such as the Audi A3 Sportback and SEAT Leon have received full stars in the latest batch of Euro NCAP tests. 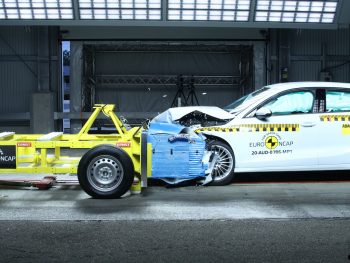 In the latest batch of tests, the Audi A3 Sportback and SEAT Leon, the Isuzu D-Max, Kia Sorento and Land Rover Defender all scored five stars

Due to the pandemic, the seven-strong line-up was only the fourth batch of tests to be carried out this year against the organisation’s new, more stringent protocols.

As well as the Audi A3 Sportback and SEAT Leon, the Isuzu D-Max, Kia Sorento and Land Rover Defender all achieved the maximum five stars, while the Honda e scored four stars and the Hyundai i10 was awarded three.

Both the new Audi A3 Sportback and SEAT Leon sit on the same MQB-II platform as the eight-gen Golf but now feature a centre airbag to improve far-side impact protection. In terms of results, the Leon is said to have the upper hand, thanks to a more compatible front-end design that gives it a 92% rating for adult occupant protection.

But while the D-Max and Defender also gained five stars, they were found to be too aggressive under the mobile progressive deformable barrier (MPDB) test, which looks at the threat they pose to partner vehicles in a collision.

Euro NCAP’s secretary general, Michiel van Ratingen, added: “Poor crash compatibility between vehicles has been a problem for years. Now, in 2020, we have a frontal test which can assess how a vehicle performs in this regard and can penalise those cars that perform poorly. This is a first for safety assessment and should lead to better, more compatible designs in the future.”

The brand-new Honda e also lost points in the frontal impact test, this time for the risk of injury to its own occupants in a collision.

Finally, Hyundai’s i10 earned a three-star Euro NCAP rating. In four test categories, it scored lowest for occupant protection. Its Autonomous Emergency Braking (AEB) system was able to detect pedestrians – although its response was said to be marginal – but it was unable to detect cyclists.