Asda has announced a further fuel price cut, marking its second in a fortnight, following further decreases in the cost of wholesale oil. 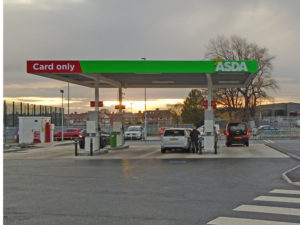 The latest cut brings a further 2 pence per litre (ppl) off unleaded and up to 1ppl off diesel on the supermarket’s national price cap this morning, which means that drivers across the country will pay no more than 122.7ppl on unleaded and 126.7ppl on diesel at any of its 318 filling stations.

It brings the total fuel price cut at Asda up to 5ppl on unleaded and up to 3ppl on diesel in just over a week.

Sainsbury’s followed the announcement with news that it is cutting the price of unleaded petrol by up to 2ppl and diesel by up to 1ppl across its 311 forecourts from Saturday 23 June.

RAC fuel spokesman Simon Williams greeted the announcements, adding: “A litre of petrol is now 13p more expensive than a year ago while diesel is 15p dearer so every penny that comes off the forecourt price is very welcome.

“We are hopeful that OPEC’s meetings in Vienna today and tomorrow will result in oil production restrictions being lifted which could lead to cheaper fuel prices for drivers in the UK.”