An Advertising Standards Authority (ASA) ruling that dealers must specify if cars are ex-fleet could bring a two-tier used market. 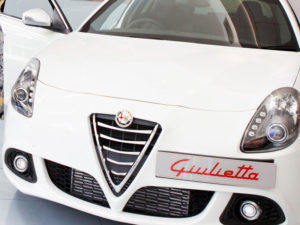 The ruling in November covered two Alfa Romeo Giuliettas, which when sold were not advertised as ex-fleet

That’s the view of one industry expert as the ASA decision opens the floodgates to possible compensation claims.

The ruling in November covered two Alfa Romeo Giuliettas, bought by Romford-based dealer group Glyn Hopkin from Fiat Chrysler Automobiles UK (FCA), and sold online via the carmaker’s used vehicle site, based on a templated advert. The ads were considered misleading by the ASA as they said the vehicles had one previous owner but did not highlight that they were ex-fleet vehicles.

Now, legal firm Harcus Sinclair is bringing a class action alleging mis-selling on behalf of consumers who purchased second hand vehicles but were not informed about the vehicle’s previous use by the manufacturer or dealer they purchased from.

In response there are concerns from leasing and rental companies that disposal values may be depressed a little, although Jim Blair, operations manager at Arnold Clark Vehicle Management, has said he thinks the concerns are unfounded.

Blair added: “I think a used car buyer has the right to know the provenance of the car they purchase. The idea that fleet cars are to be avoided as used cars is something of an old-fashioned idea. Due in main to more stringent health and safety laws, business cars these days are professionally managed, checked on a regular basis and are fully serviced and maintained. The used car buyer really has nothing to worry about. Indeed, compared to an identical car with identical mileage that was privately owned, you might argue that the fleet car represents better value for money.”

Meanwhile both epyx and the Vehicle Remarketing Association have said that on the whole used car buyers are very much aware of the benefits of fleet cars.

Tim Meadows, commercial director, epyx, said: “[This] is actually an opportunity to overturn any lingering prejudices among private used car buyers against ex-fleet and ex-hire vehicles. The fact is that these cars and vans are almost certainly maintained to a higher standard during their operational lifetimes than the vast majority of privately owned vehicles, and then prepared to a higher standard for sale. Ultimately, an ex-fleet or ex-hire vehicle is a very sound purchase.”

And Glenn Sturley, chair, Vehicle Remarketing Association, said: “An ex-fleet vehicle of any description will have been subject to very high standards of maintenance and the vendor will usually have invested heavily in ensuring that it reaches the used market in the best possible condition. We believe that the vast majority of used car buyers know and understand this, and will have no problems with this kind of stock.”

But Dean Bowkett, MD of Bowkett Auto Consulting and former director and chief editor at the EurotaxGlass’s global services team, warned that the Consumer Protection from Unfair Trading legislation (CPUT), the Checklist for Second Hand Car Dealers and the ASA ruling make it far from clear what is required by traders “and more importantly why it is important with fact-based evidence”.

Bowkett is also working with Geldards LLP to provide the industry with advice on the legal arguments and expert evidence that can be deployed against liability and the practical steps that the motor industry might take to protect itself, but is also urging for big company support too.

He commented: “The whole industry needs to realise this is not just a dealer issue. If CPUT and the ASA create a two-tier retail sales pricing system then expect there to be a two-tier trade buying system. We need to collectively lobby government to educate and correct their misleading guidance.”

Geldards and Bowkett are also running a free seminar to address the main issues of the ASA ruling and the group action from the perspective of retail car and LCV dealers, daily rental companies, OEMs, funders of rental/ex rental and trade bodies.