ARI’s Masterserve Foundation has announced the seven charities that will receive funds raised in the second quarter. 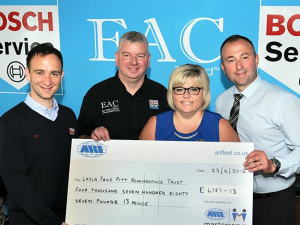 The foundation was set up nearly a year ago to raise funds for charities nominated by members of the Masterserve network and approved by a committee of several independent garage owners from within Masterserve. Funds are raised from garages within the network donating an agreed percentage from every job carried out to the Foundation. Since last November, it has donated over £16,000 to a number of different charities.

For the second quarter of 2016, it was decided that the awards – which total £17,730.90 – would be donated to the Layla Jane Pitt Remembrance Trust, Sands, Prospect House, Chrysalis Youth and Community Project, the Flintshire Deaf Children’s Society and the Beatson Cancer Charity.

In addition to the second quarter recipients, the Masterserve Foundation is supporting the British Heart Foundation as its national charity. They will receive an annual award that accrues each quarter and will be presented at the Masterserve conference held in October 2016.

Sharon Edwards, ARI’s manager, national suppliers, said: “To see the amount raised so far is astonishing. The work being done by these chosen charities is making a real difference and to be supporting a foundation that is committed to helping every day is an honour.”

Previous: 16.5 million UK drivers to take to roads this bank holiday
Next: 1,000 road accidents a year caused by driver fatigue