By Martyn Collins / 12 months ago / Features / No Comments 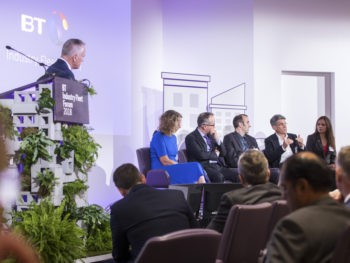 A key event in the fleet calendar, the BT Fleet Solutions Industry Fleet Forum late last year was attended by well-known names across the industry to shed valuable light on clean air and alternative fuels, and how fleets are taking the latest developments on board. And the findings make very interesting reading for fleets.

The event marked the official release of BT Fleet Solutions’ Operational Fleet Insight 2018/19 report, which sets out fleet views on the key industry challenges. Now in its third year and published, once again, with the AA, the report sought the opinions of 505 key fleet decision-makers – as well as 16 industry experts – and reveals that a third of fleet managers currently don’t have a strategy in place to make their fleet ready for the 2020 launch of charging clean air zones.

With around half of those citing lack of clarity and information as to the reasons why they’ve not set out to make their fleet ‘2020-compliant’, it is clear there is a need for the Government to further collaborate with fleet operators. In fact, four in five fleet managers say the Government’s current strategy hasn’t considered the impact that policies will have on businesses.

The findings are borne out by industry experts, including Jay Parmar, director of policy and membership at the British Vehicle Rental and Leasing Association (BVRLA), who said charging clean air zones are just one option open to local authorities and not the best; he says they are “almost like a meat cleaver to carry out heart surgery, as it’s not the most effective tool”.

Instead he outlined how other tools are available to local authorities, such as access restrictions on the most polluted roads or even changing the road layout to remove congestion and get the traffic moving more efficiently, would be a more targeted approach and better for the fleet industry. Or, he continued, drivers should be encouraged to adopt ultra-low emission vehicles.

“The Government need to put their money where their mouth is and actually support financially our individuals and businesses,” Parmar said.

Local authorities will have a range of options, and they will have to decide which is going to be the most effective, when they’re thinking about clean air zones. And this is what worries Parmar and the BVRLA, firstly with the charging structure for non-compliant vehicles.

“Euro 6 is the standard for diesel, with Euro 4 for petrol. I think that’s a very clear national standard, but all cities are going to be working through that. All the plans are going in and we don’t know what they are, although we have had a heads-up from some local authorities.”

What it does look like though is that by 2020, when these schemes go live, there will be a charge to come into these zones of £12.50 for vans and the cost for cars to be between £6 and £12. “That’s the range of charges they’re looking at and when you start to think about the number of vehicles that are non-compliant, that’s quite an expensive cost for fleet,” added Parmar.

However, on top of the councils that have confirmed plans for these clean air zones, there are 23 other English councils that have yet to implement a plan to deal with the air pollution in their towns and cities by 2020. Without a national standard for charging, the BVRLA believe things could get very messy for fleet if every city does its own thing. Especially if operators have a fleet working between a number of major UK cities.

“This is going to be one of the most disruptive changes that fleet are going to have to manage — because it is going to be a whole patchwork of solutions and schemes and that’s the point that we need a national framework,” said Parmar.

And while Parmar explained that the BVRLA totally understands the reason why government have decided the best solution for towns and cities is by consultative approach, he says what they need is central government to step in with a very clear national framework.

“Once the Government have committed to a national framework, the devil is very much in the detail. For example, how do you register for these schemes? How do you pay for those schemes? What sort of signage will we see and what are the operating hours? So, what fleets need a central government approach.”

With this incoming legislation, the BVRLA believes there needs to be much greater support for fleets. Their solution is to open up their membership to fleet operators from January 2019.

Diesels not the dirtiest

So, clean air zones are vital for the medium and long term, but what about the very short-term and what decisions should fleet managers be making today and in the immediate future?

This was covered in the second panel discussion, which saw Nick Molden, Emissions Analytics’ founder and CEO, outline his view on the solution to Dieselgate and urban air quality.

There cannot be enough EVs on the roads soon enough to clean up our air by 2020, he said, adding it’s “just logically impossible”.

He also believes there is one key flaw with the clean air zones legislation – you can’t have an effective charging clean air zone based on Euro 6 emissions standards, which he said­ are “totally debased” and “completely ineffective” from a policy point of view.

Molden added that Emissions Analytics’ independent testing on hundreds of vehicles on the road has found that, regardless of whether it’s passenger cars or vans, there is a huge disparity in performance of Euro 6 standard vehicles – with some very dirty and some very clean.

“What we’ve found is if you go back to 2013, the dirtiest diesels were emitting 1,770mg/km of NOx, compared to a standard of 80mg/km – but these were all legal, that’s the Dieselgate crisis in a nutshell.”

He went on to say, that in the same year, the cleanest diesels and petrols were emitting 265mg/km of NOx and they were both labelled Euro 6.

So which do you choose? Wind forward to last year and according to Molden, if you do the same calculation, the dirtiest 10% were doing 1,020mg/km, but the cleanest were doing 32mg/km – half the regulated limit. This year, the cleanest diesel they’ve tested is 11mg/km; compare that to the average of petrol cars, which are at 41.

So if you choose wisely, diesel cars on the forecourt today are substantially cleaner than the average petrol!

What about the new Real Driving Emissions (RDE) test? According to Molden, diesels are still averaging 48mg/km. “The new regulations are much better, but they’re still called Euro 6 and you can’t find out easily if a vehicle has been certified to RDE standards or not, so for anyone buying, it is totally baffling.”

So how can fleet managers make the decision to go with diesel or petrol? Molden believes that using Euro 6 as the strong message is breeding consumer cynicism and confusion, with people switching back to petrol because they think it is the safer option.

“It is not the safe option, it’s arguably making the situation worse, because if you compare diesels and petrols, arguably petrols are worse, they’ve got higher CO2 emissions — up to 18% higher. Look at the particle emissions for diesels and they are 71% lower, on average when compared to petrols.”

Molden concluded by offering his alternative to the Euro 6 ratings, called the EQUA Index. It offers ratings for MPG, carbon monoxide, carbon dioxide, but also for NOx. Everything on there is rated on a scale from A to H. If it’s A it meets 80mg/km even in real-world driving conditions, if it’s H it is 12 times the limit. The Mayor of London even republishes Emissions Analytics data on the official london.gov.uk website, to try to inform people.

The event also included a presentation from Antonio Balboa, director of sales and application from Bosch, about

the technology that Bosch is bringing in and that conventional combustion engines can be made to deliver incredibly low emissions.

Meanwhile the last panel discussion of the day saw Jon Hunt, manager alternative Fuels at Toyota (GB), Martin Flack, Iveco’s alternative fuels director, and Helen Lees, head of electric vehicles for the PSA Group in the UK, talk about how there is not a single solution for the alternative fuels debate. Instead, there are ‘horses for courses’, with different types of vehicles for different usages and what independent analysis is showing them being used for.

What came across overall in the BT Industry Fleet Forum 2018 is that there is a huge amount of goodwill across the fleet industry to address the clean agenda and in addition, there is a huge amount of innovation, with the general feeling that everyone wants to pull together in the right direction. The only difficulties are with how everyone interacts with each other.

BT Fleet managing director Henry Brace summed it up best: “85% of us feel we can collaborate better both together with interest stakeholders within the fleet industry, but then quite critically with legislators. I think this is where we’ve not covered ourselves in glory — there are so many unintended consequences that have come out today.”