Almost half of drivers aged 25-34 use apps while driving

New research finds drivers aged between 25 and 34 are taking huge risks by texting, using apps or going online on their mobiles when they are behind the wheel. 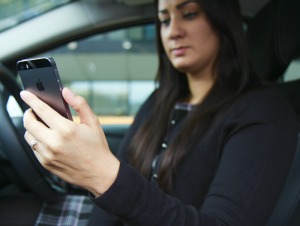 The study by Brake and Direct Line reveals that more than half (55%) of 25-34 year old drivers questioned admitted they had sent or read a text message on their mobile, while behind the wheel of their car, in the last year.

Despite it being illegal to use a hand-held mobile phone at all while driving, more than four in 10 (42%) revealed they send or read messages at least once a week.

Meanwhile one in five young drivers (18-24) confirmed they regularly text and/or instant message when they are behind the wheel.

And just under half of drivers (49%) aged 25-34 admitted they sometimes go online or use apps (other than sat nav apps) while driving. Almost a third of drivers in that age group said they do that several times a week at least.

Alice Bailey, campaigns and communications adviser for Brake said: “Younger drivers, especially those aged between 25 and 34, simply aren’t getting the message about the dangers of using a mobile phone while driving. Doing any other complex task while driving hugely increases your chance of crashing.

“We’ve seen recent examples of drivers who have crashed while trying to play games like Pokémon Go or posting Snapchat images while behind the wheel. These drivers are putting their own and other people’s lives in grave danger by taking this risk.

“If a phone has to be used as a sat nav, it must be programmed before setting off on the journey and properly secured. There is no other acceptable way to use a phone while driving.”