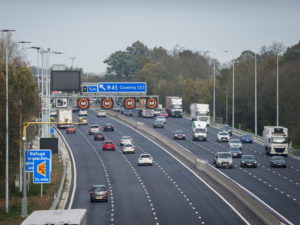 The survey by the AA of more than 19,500 members found that more than a fifth (22%) ranked motorways with either Dynamic Hard Shoulder or All Lane Running schemes as the most dangerous roads, putting them in joint second place behind unclassified narrow lanes (36%) and ahead of rural B-roads (19%).

However, less than one in 20 felt a traditional three-lane motorway with a continuous hard shoulder were the nation’s most dangerous road type (4%).

The research also found that more frequent Emergency Refuge Areas (ERAs) improved drivers’ perception of safety; smart motorways without hard shoulders but with emergency laybys increased to every 0.6 miles instead of every 1.5 miles were scored as the most dangerous roads by 18% of respondents.

Highways England chief executive Jim O’Sullivan has indicated spacing between ERAs on new All Lane Running schemes will be reduced from 1.5 miles to one mile, while a dialogue between Highways England and the Transport Committee continues.

AA president Edmund King said: “There is still some way to go to convincing drivers that a mile is a distance they can cover with an ailing vehicle. More than half of drivers (55%) say that, faced with their vehicle breaking down, they are only prepared to drive up to half a mile before stopping in a live lane.”

Lilian Greenwood MP, chair of the Transport Committee, added: “Plans to reduce the spacing to one mile between the refuge areas in future schemes falls far short of the Committee’s recommendation that the areas should be spaced at 500-800 metres apart, as in the M42 Active Traffic Management pilot which the Committee supported. This AA survey shows qualified support from the public for refuge areas spaced one kilometre apart (0.6 miles). I would urge Highways England to review this decision.”

Previous: JLR says production cutbacks are temporary
Next: What Car? reveals Car of the Year for 2018