Tolls for the Severn Crossings are to be abolished on 17 December, slightly earlier than the original deadline of the end of the year and just in time for the festive getaway. 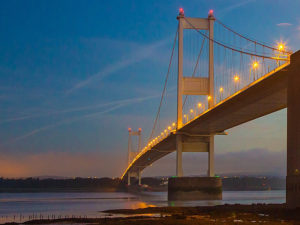 The Severn Bridge toll will end on 17 December

Plans to abolish the tolls were first announced more than a year ago and will save regular users more than £1,000 year.

Removal of the tolls will also have a claimed economic boost to the Welsh economy of an estimated £100m each year. The two bridges, which opened in 1966 and 1996, are used by 25 million vehicles each year but the tolls have been argued to be a barrier to business growth in South Wales.

Secretary of State for Wales Alun Cairns said: “Today marks an important leap forward in Wales’ economic potential, increasing our appeal to external investors but also ensuring businesses, commuters and tourists on both sides of the border are no longer hampered by a fee restricting them from carrying out their everyday lives.

“Removing the tolls will cement the already strong ties between the economies and communities of South Wales and the South West of England, creating a growth corridor for prosperity to flourish from Cardiff, through Newport to Bristol and beyond.”

Commenting on the announcement, RAC head of roads policy Nicholas Lyes said: “Many would argue that this should have happened years ago. Business drivers, holiday makers and commuters will have endured significant delays at the pay booths over the years. Perhaps now the Government may have an appetite to review other toll crossings where financially viable.”