By Katie Beck / 5 years ago / Features / No Comments 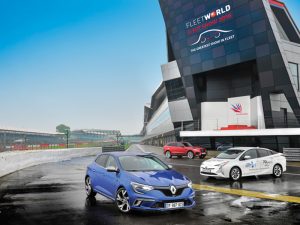 In the first of two months of coverage we look at what they drove and reactions to the show.

A variety of first drives, the inaugural Question Time Debate and a packed indoor exhibition all combined to make Fleet Show 2016 at Silverstone a successful day out for the industry.

The panel included representatives from government and leading industry organisations, and tackled a number of contentious topics including company car taxation, the security of connected vehicle data and the impact of a potential Brexit for fleets.

Go Ultra Low also held a business lunch for invited guests, with the aim of helping motorists and fleet decision-makers to understand the benefits, cost savings and capabilities of the wide range of electric vehicles (EVs) on the market, aiming to boost electric vehicle uptake as an alternative to petrol and diesel vehicles.

And outside on the Copse Runway, Thatcham Research held demonstrations of a number of safety systems including crash avoidance technology and advanced road train technology.

The event’s organisers were delighted with reactions to this year’s event from exhibitors and visitors alike.

Fleet Show director and publisher of Fleet World, Jerry Ramsdale, said: “We are thrilled to hear that both exhibitorsand visitors had a great day at this year’s Fleet Show.

“As ever with the event, it was our intention to provide aneducational event that comprises fleet training, an exhibition,networking and test-driving to justify spending a whole dayout of the office.

“We would like to thank the exhibitors for all their hardwork, and the hundreds of visitors who took time out of theirbusy schedules to join us at Silverstone.”

Audi was showing the new Q7 e-tron plug-in hybrid for the first time in the UK, alongside it’s more regular fleet offerings. James Douglas, fleet sales director at Audi, reckoned there had been a lot of interest in the e-tron from corporate users, and that the all-new A4 was starting to find its way onto fleets now too. For those looking for thrills, the firm also had professional drivers at the show giving visitors passenger laps in the remarkable 362bhp RS3.

DS is looking to carve itself a space in the premium car sector as a standalone brand, and so it had the New DS 3, DS 4, DS 4 Crossback and DS 5 at Silverstone. All now get the ‘flying wings’ chrome front grille treatment for a more high-end look.

Launching alongside the new Talento and Fiorino vans, Fiat Professional will enter the growing pickup segment with the Fullback during 2016, and the rugged newcomer was on display at the Fleet Show. Designed for leisure and workhorse duties, it’s powered by 150 and 180bhp diesel engines, and available in the UK as a versatile double-cab with a one-tonne payload.

Fresh off the production line, the latest Abarth 595 continues a hot hatch success story which began in 2008. Competitively priced and with Italian style as standard, it’s powered by a choice of 143bhp or 163bhp turbocharged engines, the range topped by the potent 178bhp Competizione version. Abarth will also soon launch a tuned version of the 124 roadster.

The new Sportage has more than continued the momentum started by its predecessor, becoming one of the UK’s fastest-selling cars in its first months on sale. The new model was available to drive at Silverstone alongside the brand’s expanding product portfolio, including a refreshed version of the cee’d launched last year and the new Sorento, which is attracting top-heavy demand in the UK.

Having shown its potential in the i sub-brand, BMW’s electric vehicle technology will launch across its mainstream product portfolio under the iPerformance badge, beginning with the X5, 2 Series Active Tourer and 3 Series – all of which were on show.

Citroën showed off the multi-award winning C4 Cactus, the spacious Grand C4 Picasso and was highlighting it ranges of engines: the PureTech petrol and BlueHDi engines. There was also the chance to see the all new Citroën Dispatch van featuring its clever hands-free sliding side door.

Silverstone hosted the latest additions to Fiat’s globally popular 500 lineup, including the updated version of the chic city car and its crossover sibling, the 500X. This is to be a formative year for the brand in fleet, with the Tipo hatch and estate putting it back into core corporate sectors, while the new 124 roadster will offer open-top Italian motoring for user-choosers.

Mazda proved exceptionally popular thanks to passenger laps in the brilliant MX-5, while it also had the rest of its range available for more sober analysis once the adrenalin has stopped pumping, in the form of the new CX-3, CX-5 and Mazda6, among others.

Volvo’s product revival is well underway, and the S90 and V90 executive saloons are due later this year. Silverstone marked the UK debut of the XC90 Excellence, a chauffeurhoned version of the SUV, alongside the 49g/km plug-in hybrid version, the latter of which was available to drive.

The iconic American off-road brand is expanding its business-friendly model range, offering genuine off-road ability and unmistakeable Jeep design with a line-up of competitive new diesel engines and two wheel drive versions for fleets. Currently celebrating its 75th anniversary, it’s promising plenty to get excited about in the near future.

The first half of 2016 has been busy for Tesla, with upgrades for the Model X SUV ahead of its European launch, and a major update for the Model S, which was on show at Silverstone. Both are precursors for the Model 3, which will take on the compact executive segment in 2018.

Peugeot is rediscovering its sportier side, with acclaimed GTI versions of the 208 and 308 leading the charge. For company car drivers, that lineage is accessible through warm GT versions and stylish GT-Line models, each available with low- CO2 diesel engines to keep costs down.

A familiar name, but a new concept, the Clubman takes MINI’s unique character, and scales it up to a family-friendly premium hatchback. Sure to find favour with design-conscious user-choosers, the Clubman is soon to gain a 99g/km One D version, and was available to drive in core Cooper D and four-wheel drive Cooper SD form at Fleet Show 2016.

Infiniti has its sights set on significant growth in Europe, and the Q30 hatchback and its QX30 crossover sibling are the tools for the job. Both built in Sunderland – for global markets – they’re aiming to stand out with swooping bodylines and high technology, and established premium hatchbacks on their hit list.

Making its UK debut at Silverstone, the Ateca is a vital launch for SEAT, finally extending the range to include the first of at least two crossovers. Sharing its platform with the Leon, engines include 1.6 and 2.0-litre diesels and a cost-effective 1.0-litre petrol turbo for low-mileage business drivers.

The Giulietta appeared at Silverstone following a complementary refresh inspired by the forthcoming Giulia saloon – a crucial launch for the brand. New versions include a 118bhp diesel engine equipped with the twin-clutch transmission, emitting 99g/km CO2, as well as a generously equipped Tecnica trim aimed at the corporate market.

The Fleet Show marked the UK debut of Renault’s crucial new Megane hatchback, with high demand for test drives throughout the day. Longer, lower and wider than its predecessor, it gets a tablet-like R-Link 2 infotainment system and offers CO2 emissions from 86g/km – next year’s mild-hybrid diesel will take that even lower.

Toyota’s expertise in hybrids is unsurpassed, and it used Fleet Show 2016 to illustrate this with the superb new Prius. While eco driving might not be the first thing that comes to mind on a grand prix track, drivers were achieving some remarkable fuel economy, illustrating just how well the technology now works.

Also, the firm brought the new RAV4 Hybrid crossover and Lexus RX 450h SUV, as well as offering a glimpse at hydrogen fuel cell technology with the remarkable Mirai.

The F-PACE was one of the stars of the Silverstone show and a number of the new sporting SUVs were on track from the start of the day until the end, illustrating the huge demand there will be for the car from corporate users. With new XEs and XFs also available to drive and the Land Rover and Range Rover products always popular for a cruise around the track, it was a busy day for the brand.