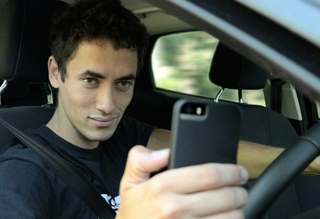 That’s the finding of new research by the Institute of Advanced Motorists (IAM), which asked 500 drivers how they use their smartphones and tablets in the car.

A total of 8% of drivers admitted to driving while using a video-calling application such as FaceTime and Skype to make and receive video calls, rising to 16% among 18 to 24 year olds.

An IAM study in 2012 showed that using a smartphone while driving is more dangerous than driving at the legal alcohol limit or when using cannabis. Drivers have much slower reaction times, difficulty staying in the same lane and are less able to adapt to even slowly changing circumstances.

“Safe driving is everyone’s responsibility and more must be done to catch drivers using these devices dangerously by increasing the fines and points for smartphone and tablet use at the wheel – there is simply no excuse.

“Campaigns must also be introduced that raise awareness of the prevalence of the issue in society and make this behaviour socially unacceptable as drink-driving”.

Despite this, the number of drivers given penalty points for using a smartphone at the wheel fell by more than 40% in 2014.

Previous: EST & IFC team up for green fleet consultancy offer
Next: LeasePlan sold to consortium of investors for €3.7bn