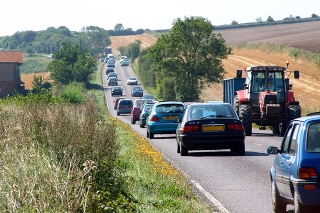 The figures have been released by dashcam maker SmartWitness using official DfT data and its own insurance reports showing peak times for accidents in previous years.

The firm adds that despite the fact that winter months generally bring more difficult driving conditions like icy roads and poor visibility, there are 27.5% more road accidents in the summer – 33,312 in July and August, compared with the winter 26,122 (January and February).

This increase is due to the greater number of motorists on the road, with the vast majority of families choosing to take their summer holidays at this time. Accidents rise sharply during June and July, hitting a peak at the end of July.

This Saturday 25 July is predicted to be the busiest day of the year on the roads, as motorists take to their cars in droves following the break-up of schools for the summer and the fact that 25 July also coincides with most workers' end of month pay-days.

Saturdays are the worst day for accidents during the summer when car drivers are nearly twice as likely (1.7 times) to be distracted or impaired in their driving than compared with weekdays.

The busiest time on the roads will be at 11am when the 'great escape' begins in earnest.

“It will be first day of the summer holidays for many families and there will be extremely large numbers of motorists taking to the roads. Cars will be packed full of children and luggage, which means that drivers will be more stressed and distracted than usual, as they make their way to airports and holiday destinations.

"As a result this day is expected to have the highest number of motor accidents of the whole of the year."

He added: “We are asking motorists to take extra special care when starting out on their summer holidays and realise that the most common cause of road accidents is not poor road conditions or your car, it’s down to bad driving.

“Also it’s essential to keep a look out for children on the roads, as there will be more kids out during day-time, so it’s vital that drivers take extra care during the summer months.”