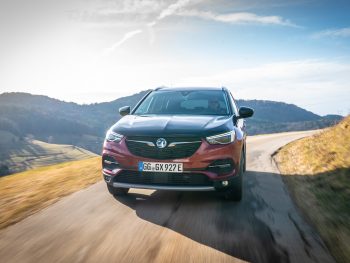 Although the Grandland X Hybrid4 – which was first announced at the 2017 Frankfurt Motor Show – was expected to bring around 49g/km of CO2 emissions with a 30-mile WLTP range under preliminary figures, Vauxhall has now said it will emit just 34g/km and offer a 35-mile WLTP range along with a WLTP combined fuel consumption of 204mpg.

Priced at £36,790, the all-wheel drive Hybrid4 features two electric motors – one on each axle – and a 200hp 1.6-litre petrol engine, giving a total 300hp. It’s being joined by a new Grandland X ‘Hybrid’ front-wheel drive variant that uses a 180hp, 1.6-litre turbocharged, direct injection four-cylinder petrol engine and a single 110hp electric motor, reducing entry pricing to £32,390. They’re both part of electrification plans that will also bring a fully electric versions of the Corsa, Mokka X and Vivaro over the next year.

The all-wheel drive Grandland X Hybrid4 comes with a 3.7kW on-board charger, with an optional 7.4kW version also available. Vauxhall will also offer devices for fast charging at public stations, as well as wallboxes at home. With a 7.0kW wallbox, customers can fully charge the battery in less than two hours.

It will also come with an exclusive charging offer that will provide customers with a free six-month membership to the Polar charging network, which comprises more than 7,000 charging points nationwide, including over 400 rapid charge points.